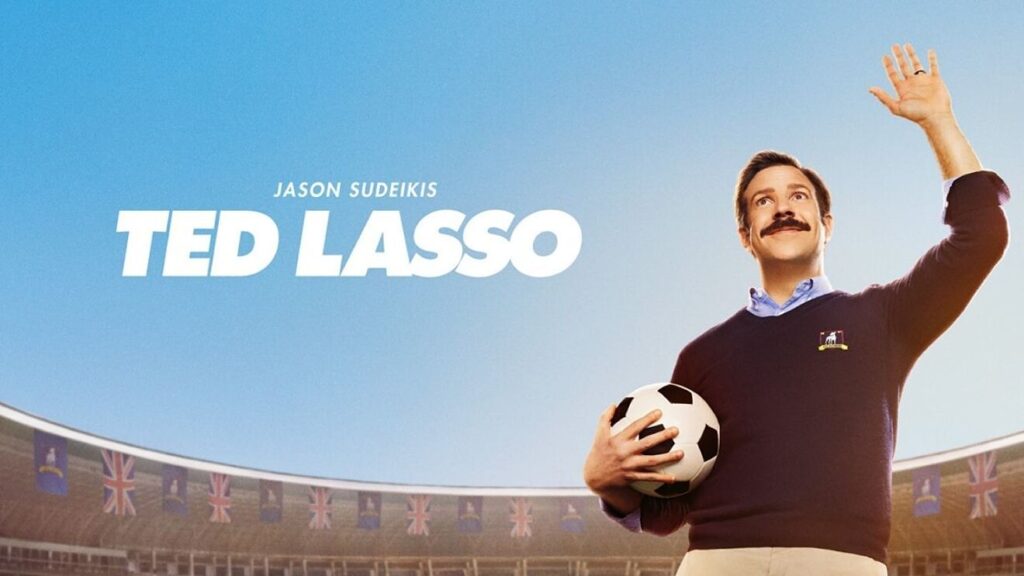 During England’s ill-fated penalty shootout against Italy in the Euro 2020 final, three young black English football players, Jadon Sancho, Marcus Rashford, and Bukayo Saka, were all targeted by racists and trolls online after failing to score from the spot. The abuse went on for days – Twitter said it removed more than 1,000 posts over 24 hours and suspended several accounts for violating its rules.

The English FA, FIFA, UEFA, F1 champion Lewis Hamilton, and several football clubs condemned the abuse. But a different celebrity went viral for supporting the football players —Jason Sudeikis, the former Saturday Night Live superstar and current lead actor of Apple+TV series, Ted Lasso, a comedy about an American football coach who is surprisingly promoted to be the manager of a Premier League team. In July, Jason appeared at the premiere for season two of the show wearing a t-shirt that read ‘Jadon&Marcus&Bukayo’, including trainers emblazoned with the word “equality”.

But why should anyone care about Ted Lasso, the character or the television series? If you have not watched the show, let’s begin with the weird premise. Nothing captures it better than a funny scene in the first season: the title character, Ted Lasso, sprints to the assistant referee in the middle of a crucial match after raising his flag for an offside call.

“What do you mean? Explain to me how that’s offside?” complains Lasso, with his characteristic midwestern drawl as the linesman stares at him with confusion.

“What?” asks the official. Lasso walks closer. “No, I’m serious. How’s that offside? I don’t understand it yet”.

You see, Sudeikis actually plays an American college football coach who is drafted in to manage an English Premier League soccer team despite knowing nothing about the sport. By the end of the first season, the manager leads his struggling team into relegation. When you apply a little logic, it sounds like a story that shouldn’t work, doesn’t it? It’s almost like the last four films from the Fast and Furious franchise —just more stupid. But here are some brand-building lessons we can all learn from the hit series.

It was a pretty simple idea. In 2012, NBC Sports bought the streaming rights to the Premier League, even though the league didn’t have quite the traction in North America at the time. Soon enough, the network executives realised that the $250 million streaming deal could turn out to be an excellent but massive flop without proper marketing and promotion.

And here comes Ted Lasso. In the promos to announce the new deal, he takes over Tottenham, coaching players such as Gareth Bale and Aaron Lennon, and questions why the players don’t wear more pads. He has no knowledge of the game or its cultural and historical significance. He returns as head coach of a youth girls’ team St. Catherine Fighting Owls, the following season. But the advertising was a satiric outlook at two different worlds seen through the eyes of a naïve American. For NBC, it helped the network attract loyal, knowledgeable soccer fans and also appeal to a new audience.

Both promos, shot in 2013 and 2014, went viral and gained a tremendous amount of attention. Since then, the videos have generated more than 20 million views on YouTube and helped the network build a strong foundation for its Premier League audience. By 2015, his former partner and filmmaker Olivia Wilde advised him to transform Ted Lasso into a television show. “When you have a gem of an idea, you don’t know if it’s something you say out loud or if it’s a tweet or a letter or a screenplay, who knows,” Sudeikis told Sports Illustrated. “So, we sat down, and we were able to bang out a pilot pretty quick that week. As well as outlining 6 to 10 episodes of the first season. And that let us know, ‘O.K., there’s something here.’”

But there was a slight but critical change. In the commercials, the manager’s unawareness can appear funny and maybe endearing. But in the show, Ted Lasso is warm, funny, and full of hope. Unlike the commercials, where Ted’s most significant trait is his buffoonery, the show celebrates his relentless thirst for everything positive. He is full of passion, dignity, and optimism. Rather than a stupid naivety, his innocence is both a strength and a weakness. After audiences have had their feel of popular vengeful, hardcore, dog-eat-dog TV series like Billions, Game of Thrones, Warrior Nun, Tiger King, and others, Ted Lasso’s kill-them-with-kindness approach provides a much-needed relief – a good feeling that lets you think everything may turn outright.

When the show debuted in August 2020 – right in the thick of the coronavirus pandemic and social restrictions. It did not spark interest immediately, but demand for the series grew over time as more people discovered it. The series peaked around 50 days after its debut and was 25 times more in demand than the average series in the US at that time. It even surpassed Apple’s biggest series so far, “Defending Jacob,” and hasn’t fallen in demand much since. It is one of Apple’s best-reviewed original shows with a 92% critic score on Rotten Tomatoes and has already been renewed for a third season. The more the audience felt better about the title character’s infectious kindness and unfailing optimism, the more they shared with friends, families, and colleagues.

Interestingly, the epitome of Coach Lasso’s optimism is also evident in how he has manifested his personality into real, verified accounts. The show even collaborated with the US Soccer Women National Team to announce the players headed to the 2020 Tokyo Olympics. As an April fool joke, the governor of Kansas even recognised Ted Lasso as Kansas Coach of The Year. It is so organic that many people still find it difficult to understand that he is not a real coach. The fans of the show have happily blurred the line between real and reel in an attempt to hold on to this fictional feel-good world of Richmond life. Ted Lasso’s pinned tweet is, “I believe in believe.” and one of his retweets is the famous Keanu quote on Norton’s show, “I don’t want to be part of a world where being kind is a weakness”.

For the show, there is no Jason Sudeikis, only Ted Lasso – who actually has more followers than Sudeikis on Twitter. But many fans of the show have constantly explained the similarities between Lasso and the lead actor himself. For example, Jeremy Swift, who plays the administrator Higgins at AFC Richmond in the popular comedy show, says his co-star’s gesture with t-shirts at the series premiere did not surprise him. “Jason is just completely sound and always slightly ahead of you,” he said. “He’s very, very smart and very, very emotionally smart, intelligent. As well as being hugely funny and a brilliant actor – ah, he’s really annoying!”

The show came at the appropriate time. The title character’s emotional intelligence was precisely what a pandemic-stricken and socially restricted world needed. From an uncertain beginning with a foggy premise, Ted Lasso has risen to become a jewel in the crown of Apple TV+ and the cynosure of the American television world. The first season of ‘Ted Lasso’ was recognised with an esteemed Peabody Award and a SAG Award for Outstanding Performance by a Male Actor in a Comedy Series Award for Sudeikis.

“Ted Lasso has no right to be this funny,” stated Entertainment Weekly’s Kristen Baldwin. “It’s got a one-joke premise. But the new Apple TV+ comedy is a wonderfully amusing, surprisingly thoughtful sports sitcom that is, of course, not really about sports at all.” Instead, it’s about the good guy – the good brand – and the importance of compassion, humility and decency, even in the face of insults and abuse. Something many brands and companies can definitely use. Because, you see, sometimes the good brands do win.