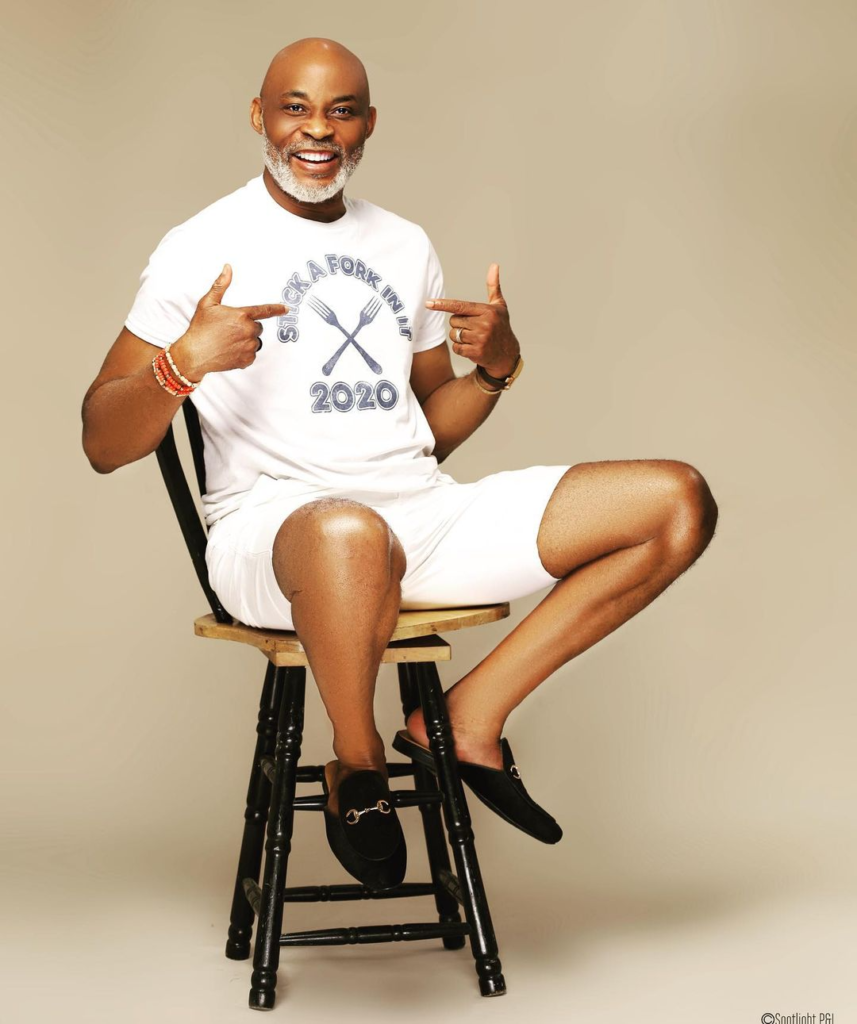 Richard Mofe-Damijo is acting royalty as far as Nollywood is concerned.

When casting decisions are made – it doesn’t matter the role – there is only one rule. Put RMD on your shortlist. And you know he is not number three or two. This according to a casting director whose job it is to know these things.

Think of some of the top grossing films of the last decade. RMD has been involved in one way or the other. In fact the movies wouldn’t work without his dependable presence. The Wedding Party movies where he plays the uptight billionaire dad with the funny way of speaking Igbo. Or the AY Makun starring comedies double bill of 10 Days in Sun City where he plays a billionaire villain type and Merry Men: The Real Yoruba Demons where he plays a wealthy dad. All four movies have grossed in excess of 1.3 billion Naira at the box office making RMD a major box office juggernaut in his own right.

If you think that Richard Mofe-Damijo has been able to give only phone-it-in performances in surefire blockbuster fare of late, think again. The grandfather and style icon has also been able to feature prominently in films that have shaped the culture.

In 2018, the decorated thespian and sometime politician won his second Africa Movie Academy Award (AMAA) trophy for best actor in a leading role for his work as a police detective in the still as yet unreleased crime thriller, Crossroads directed by Seyi Siwoku. 2019 saw RMD joining the ensemble cast- alongside Nkem Owoh, Zainab Balogun, and Onyeka Onwenu – of the faith-based drama God Calling. He is also slated to appear in the forthcoming Netflix original, the sequel to Kemi Adetiba’s immensely popular King of Boys.

All of this is to say that RMD is booked and busy. And he has been for the greater part of his career which goes back to his early television work in the late eighties. Not bad for a sixtyish year-old entertainer who started his performing career in the theatre.

Not all of this happened by chance though.

Though years removed from his heartthrob peak, Richard Mofe-Damijo has been able through shrewd strategizing and some stroke of luck, been able to refashion himself as a timeless, cultural icon relevant across the shifting tides of the culture. He was on stage when it was the place to go to for A-list talent. He made the transition to television smoothly, working on the late eighties hit, Ripples before his sex appeal status was solidified with a starring role on Checkmate also on television.

In the home video heyday, RMD was the leading man of choice, romancing several generations of leading ladies from Bimbo Akintola to Genevieve Nnaji and left no doubt of his ability to interprete complex roles in video staples like Out of Bounds and Violated.

When the film industry made the pivot to the big screen, RMD was there as well, maintaining his leading man pedigree. Turn on Netflix today and RMD’s presence is a reassuring one in films like Seven and Oloibiri. He has worked with leading lights of Nollywood such as Tade Ogidan and the late Amaka Igwe as well as in the Guinness Nigeria cross-continental marketing big screen event Critical Assignment.

“Brands must evolve with time and RMD does this better than anyone else, consistently too.” Says Frederick Nwaso, CEO of ’êth Communications. This art of self-reinvention is no mean feat but RMD has become expert at moving with the times and keeping up with trends even when he isn’t exactly setting them. Through all this, he makes it look effortless and gives the impression that he is exactly where he needs to be without feeling like a sellout.

What can brands learn from this king of reinvention who survived a marketers ban- alongside 7 of his A-list colleagues- in 2004 for being overpriced and then went away to Delta state where he worked for seven years in politics first as special adviser, and then commissioner for art, culture and tourism?

The first is to define your area of interest. Nothing wrong with exploring as many interests and being a Jack of all trades but no one likes a master of none. RMD studied Theater Arts at the University of Benin and even though he worked for a stint as a journalist/publisher, he performed steadily as an actor across stage and screen platforms available at the time and rose through the ranks to become one of the go-to leading men of his generation.

His brand was solid. It was sexy. It was dependable. It was the hero. Any filmmaker looking to fill any of these roles knew where to look. Audiences knew where to turn to if they wanted some. When RMD returned from his political engagements, plugging back into hearts and minds was not an idea that was farfetched because he never really left. Plus, he had demonstrated his abilities. Then, there was the willingness to work with young filmmakers like BB Shasore and Tosin Igho and even younger pop stars like Davido, keeping his brand fresh and sexy.

While brands have the prerogative to be as versatile as they want to be, it is also important to delineate these activities across similar interests and try to narrow them so each one is able to visibly or otherwise, speak to the other. RMD studied Theater Arts and Law and practiced intellectual property law relating to his interests as a performer. He also worked for a stint as PR practitioner advising corporate types and high net worth clients. When he delved into politics, he worked in the arts and culture department where his training and practice had prepared him to hit the ground running. As such even when he was away, he was never really detached from his core constituency.

Understanding the climate and adapting is important for brands looking to sustain relevancy beyond the early years. While Richard Mofe-Damijo can still burn up the screen as a leading man doing physical stunts in films like Seven and Crossroads, he also understands that the film industry favors the young ultimately. There just aren’t as many opportunities for an actor in his fifties and eventually, the father roles are going to be all that is available.

RMD has embraced this phase of his career, putting his own unique spin on the stock dignified fatherly character. He is a professional willing to cede the spotlight to younger stars while he takes on his fair share of character roles. But no one said character roles shouldn’t be fun and RMD has clearly demonstrated that he remains committed to the craft injecting his performances with an element of freedom that was often missing from his younger days. He has kept his good looks and groomed himself into a style icon setting himself distinct from his peers. Anyone can play the father sure, but can anyone play it with the same panache as RMD? We think not.

Every decision RMD has made in his lengthy and decorated career- spanning 36 years – has led to the inevitable conclusion. No matter what, we’ll always have Richard Mofe-Damijo.

Wouldn’t you want that for your brand?