AWESOME is for Everyone: Samsung is channelling peak teen energy 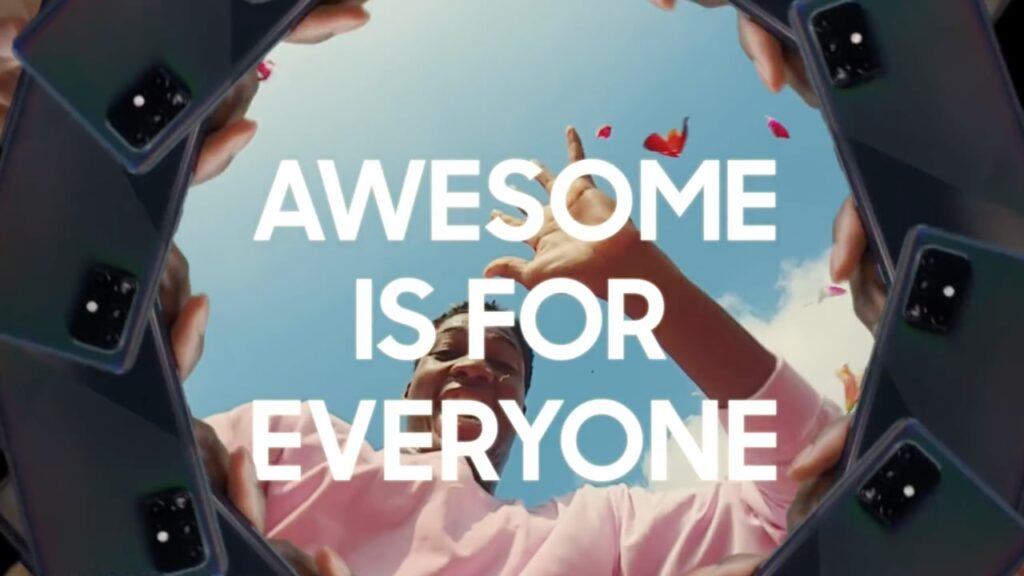 Awesome is for everyone… unless you are without a Samsung phone of course. Marketing a product as a gateway to entering a hip or happening culture has been used by brands for a long time. This is exactly what Samsung is doing in their ‘AWESOME is for Everyone’ campaign. The brand is basically claiming that its products make users amazing and that this awesomeness is accessible to anyone because everyone can buy a Samsung product. But if you don’t, please accept our condolences. You’ve been left off the AWESOME choo choo train. This strategy is mainly used to reach out to young people. It’s close to peer pressure, but with a difference — it comes from brands.

Author, Gregg L. Witt, in his book, The Gen Z Frequency: How Brands Tune in and Build Credibility, describes how brands can tap into the adolescent need to belong and use it to position their products as the next best thing.

“Why will Gen Z and those immersed in youth culture wait in line for hours at Supreme for a new product to drop? Because they want to be in the line. The line is the new community and those who wait in line earn a seat at a very elite table. For brands to succeed with Gen Z, they need to create a sense of belonging or their competition will.”

Samsung’s latest advertising campaigns clearly target the Gen Z , marketing their products as ‘cool and fun’. TikTok-styled videos were produced to announce the various features of Samsung’s Galaxy A. In addition, young creators from around the world helped develop the campaign. Music, dance, vivid colours, and a quick pace — all aspects that scream young — were some of the campaign’s defining characteristics.

On the International Frontier

Samsung is a global brand and as such its marketing strategy, plan, and ideas cascade down from its headquarters to its branches across the world. The global campaign, ‘AWESOME is for Everyone’ was created to promote Samsung’s new A-Series phone with a  focus on the age of live streaming, specifically how it is used on social media sites such as Instagram and Tiktok.

A fast-paced, energetic commercial directed by Felix Brady in partnership with Stink Films and Wieden + Kennedy premiered in December 2019. To ensure no Gen Z eyeball was spared, six 15-second feature ads and over 300 social formats to accompany the hero film were created, which featured content creators such as Madrona Redhawk, Yvng Homie, and DJ Rangster.

Wieden + Kennedy expressed that the communication message aimed “to position Samsung’s A Series phone as the go-to device for the Gen-Z creators who dominate these platforms, we created a 48-second film to engage this demographic on their own terms: with irony and irreverent fun.”

An edge-to-edge infinity screen with a pin-hole camera, a super-steady mode for smooth video capture, and, of course, long battery life are among the product’s main features highlighted in the film.

One of the most fascinating and adventurous things W+K did to create a one-of-a-kind commercial was to throw a Galaxy A phone down the stairs over 20 times to demonstrate the phone’s ‘toughness’ function, and the creators then continued shooting advert clips with the phone to prove that it was genuinely built to last.

Due to this out-of-the box thinking, Samsung Electronics was honoured by the world-famous Design and Art Direction Awards (D&AD) 2020 in the United Kingdom for its creative and innovative approach to showcasing the Galaxy A smartphones.

Samsung’s Galaxy A series is a set of mid-range smartphones and tablets that are part of the company’s Galaxy line. The first models in the series, the Samsung Galaxy A3 and A5, were released in March 2015 after being announced in December 2014. In 2021, Samsung unveiled the Samsung Galaxy A32, A52, and A72, with the aim of making powerful innovation accessible to everyone.

Iretiogo Oke, Head of Marketing at Samsung Nigeria pinpointed what Samsung set out to achieve with this series saying: “Samsung strives to give consumers what they want and need most. That’s why we set out with a vision for the Galaxy A series to democratise Galaxy innovations for everyone”.

In a conversation with Culture Intelligence from RED, Dapo Adigun, Art Director at Samsung’s in-house agency, Cheil Worldwide, emphasised that the ‘AWESOME is for everyone’ campaign was specifically for the A-series smartphones. A for Awesome. Get it? He expatiated  that the campaign was targeted at “students and teenagers.”

With the ‘AWESOME is for Everyone’ campaign, Samsung aimed to sell its A series smartphones specifically to young people. Its marketing hinged on these main selling points — longer battery life, bigger memory, super-fast charging and a high-resolution camera. Dapo Adigun, an essential strategist at the time of the campaign, dissected the brand’s strategy stating that “Samsung had to introduce affordable devices to compete with others that were trying to take their market share. With the new A-series, they are able to achieve this.

“The campaign aimed to make Samsung mid-range phones the most desirable for the people in that market segment. If you look at the influencers we used —we chose people that can relate to the target audience,” he added.

Young, cool, and trendy influencers and celebrities in the Nigerian entertainment and lifestyle industry. A major ambassador that played a major role in Samsung’s campaign was popular musician, Joeboy. He also performed in the brand’s commercials with lyrics specially written to talk about the benefits of the Samsung A series phones. Lifestyle blogger and content creator, Nonye Udeogu also featured in the clips showcasing how she uses a Samsung phone to make fashion content for her followers.

Popular skit maker, fashion trendsetter, and lifestyle blogger, Adeoluwa Enioluwa was enlisted to feature in the commercial — looking glam and dapper and displaying some of his casual dance moves. The Girls Got Bold dance crew were also pulled aboard. They brought energy and pumped up dance routines to the advertisements.

These influencers actively created content on their personal pages showcasing Samsung’s phones and why it’s perfect for them.

Samsung employed various media platforms to execute the campaign. Considering its message and the target audience, a heavy focus was placed on digital platforms. Instagram, TikTok, and other social media sites were used to amplify the adverts and content.

In the initial stages of this campaign, not much was invested in the marketing due to budget restraints. Adigun stated that it “was a low-cost campaign,” explaining that “it has recently been upped, and more is being spent on marketing and as such we still have to watch and see if anything is achieved,” he added.

Subsequently, Samsung hosted mall activations and campus storms — bringing their products directly to the people. Although some of these demonstrations were stalled a bit due to COVID-19 restrictions, the digital marketing continued just as strongly, complementing the billboard, TV, and radio ads.

Is cool, vibrant, and colourful enough?

Samsung ran an advertisement in September 2013 depicting a hipster waiting in line for the iPhone 5. He had a Samsung phone with him. People in line asked if he was going to get rid of his cell. No, he said, he’s only reserving a space for his parents. The obvious assumption was that iPhone users were old and out of touch.

Samsung hasn’t looked back since and has evidently towed the line of positioning itself as the phone for the Gen Z generation. The Samsung A-Series phones are available in varying vivid and unique colours: black, white, blue, and much more. These features are things that could be considered attractive to this target demographic.

Not much consideration is put into proving Samsung’s promise. Is it truly a good phone? Does the battery really last long? To do this, Samsung would have leaned more into product reviews as a marketing strategy but instead capitalised on selling mostly the cool factor. They sold catchy phrases like ‘awesome is for everyone’ targeted at Gen Zers.

Additionally, marketers generate the idea that their product is cool by providing stock to people who are thought to be cool by their peers, in the hopes that if they wear or use it, everybody will want it. Samsung utilizes this. Knowing that the target market is constantly creating video content for TikTok and Instagram, the brand focused on incorporating young and popular content creators as influencers of the campaign.

Young people are less concerned with price and fair product comparisons than adults, and are more likely to choose products that are common among their fashion model peers. As such what does it really matter, as long as it is cool… and awesome.