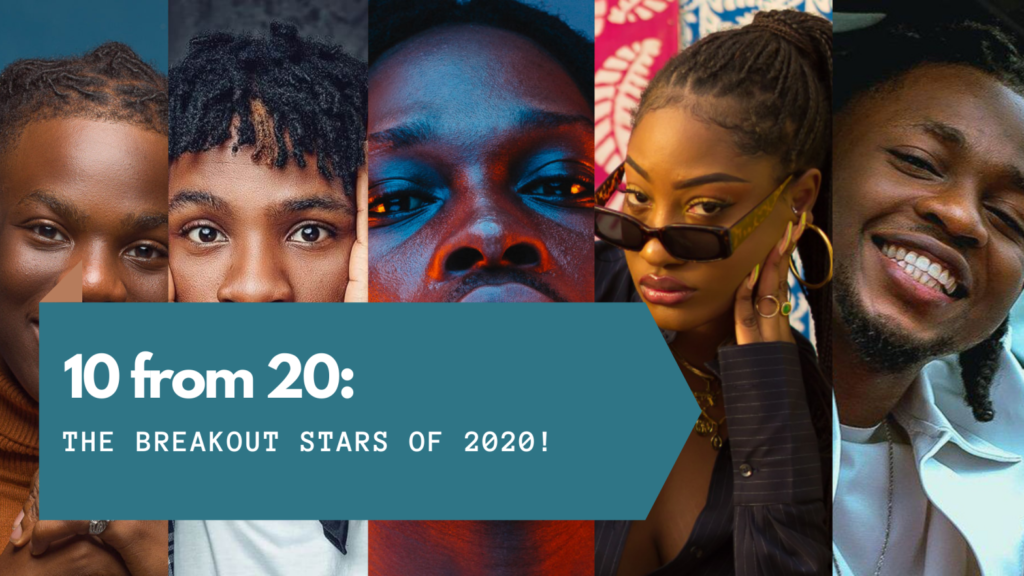 Welcome back to the 10 from 20 list! Again, our list celebrates the breakout stars of 2020. Young, relatively new artists who rose from obscurity (at least, some of them) to ubiquity within the 12 horrid months 2020 threw at us. 9 of them are below 25. Most of them released their debut projects this year. All of them have Headies nominations to show for their brilliance.

Rema is the youngest person but the oldest star on our list. Since the debut of his Rema EP in March 2019, Rema has become the #18 World Artist across Apple Music based on lifetime plays. He has made it to all Apple Music playlists available to him. In 2019, he made it to Barack Obama’s Summer Playlist and won two Headies.

In 2018, 19-year-old Divine Ikubor posted a freestyle on the beat for D’Prince’s Gucci Gang and immediately went viral. The latter brought Rema to Lagos and introduced him to Mavin Records. Rema became the first artist signed to Jonzing World (the first imprint record label under Mavin Records). You know the gist. Iron Man and the Rema EP swept the nation, Dumebi sent the planet into a frenzy. Two more EPs were released in 2019 – Freestyle and Bad Commando.

In 2020, Rema shared a Major Lazer remix of Dumebi. He then featured on a new song from British-Ghanian DJ Manny Norté called 4 AM. 6LACK and UK rapper Tion Wayne also featured on the track. In February, he shared Rainbow and Beamer (Bad Boys). Beamer was eventually listed among the official tracks of EA Sports’ FIFA 21. Then came Ginger Me, Alien, Woman, and Peace of Mind. All certified hits.

Most importantly, Rema’s 2020 was stuffed with accolades. First, the Future Awards Africa Prize for Music. In June, Apple Music put up a billboard of him in Los Angeles, in celebration of Black Music Month. In October, MTV EMA nominated Rema in the Best African Act category. In November, Rema won the award as the 2020 Best Male West Africa at the African Muzik Magazine Awards (AFRIMMA). In December, Rema received Headies nominations – Lady as Pop Single of the year and him as Hip Hop World Revelation.

In July, GQ named Rema, alongside international artists like Doja Cat and Roddy Ricch as one of the “27 musicians to make 2020 better”. With all this teasing about an album, he could make our 2021 better as well.

When DJ Neptune spoke with The FADER, he said, “When Joeboy voiced the hook on ‘Nobody”s beat, I already knew it was a hit even before he delivered his verse. Immediately I buzzed Mr. Eazi up and told him I wanted him on it.”

DJ Neptune was right. Nobody was 2020’s greatest song. It surpassed 100 million streams on Apple Music, charting in eight countries. It inspired at least 10 million dance videos on Triller. For the Headies awards, it has been nominated for Best Pop Single, Song of the Year and Best Collaboration. It was also nominated for Best Collaboration at AFRIMMA.

Nobody is trademark Joeboy. Joeboy is the minimalist hitmaker. He is Afropop’s brightest. On our list, Joeboy may have the second-fewest releases (behind Omah Lay). The shortest songs for sure. Other notable collaborations include Sun Comes Up with Major Lazer, Yoruba Samurai with LADIPOE and Love Nwatiti with CKay and Kuami Eugene.

In 2019, Joseph Akinfenwa-Donus emerged as the breakout act from Mr. Eazi’s #emPawa100 talent incubator. Love and Light EP was released as a compilation of the year’s acclaimed releases. In 2020, Joeboy followed this up with only Call and Lonely. Ultimately, December came with Celebration, an ode to a difficult year that saw him beat depression and carve his distinct lane.

Joeboy’s new project will drop on February 4 and is titled Somewhere Between Beauty & Magic. “The plan was to come up with a title that best describes love, without actually using the word love”, he said. “Love is a perfect blend of beauty and magic.” Finally! We’ll get surplus Joeboy. For once!

In 2018, Temilade Openiyi released her debut single Mr Rebel to a stunned audience. In 2019, she followed it up with Try Me, and oh, millions of listeners were immediately willing to try her sound. It is her most successful single to date.

In Let’s break down the data on streaming in Nigeria – and what it all means we mentioned how Tems’ For Broken Ears knocked Burna Boy’s Twice As Tall off Apple Music’s album charts in late September. It was an impressive feat for Tems, who had released just a handful of singles prior. Tems’ partnership with Apple Music’s Africa Rising program proved to be clever.

Apple made Tems the new face of its Africa Rising playlist that month and placed her high on its specialized Africa Now, Afrobeats Hits, Naija Hits, and Top 100: Nigeria playlists, too. This push has contributed to growing her profile globally. More than 60% of her Apple Music plays came from outside Nigeria. Her followers and streams on all platforms have doubled since For Broken Ears was released, according to Chartmetric. She was also selected for YouTube Music’s Foundry and cited by Spotify as an African artist to watch.

Tems made it to Wizkid’s Essence and the album track made it to Barack Obama’s playlist of favourite music in 2020. But it was already the second time she made it to this special playlist. In August, Tems was selected for appearing on the remix of Khalid’s Know Your Worth alongside Davido.

Soon, she may be Headies 2020 Next Rated. And we are here for that!

Adedamola Adefolahan’s Jealous dropped in 2018 as the fifth track in that YBNL Mafia Family album. Boy, hasn’t it been an envious rise ever since?

In Let’s break down the data on streaming in Nigeria – and what it all means, we mentioned that Vibration was the most streamed track throughout 2020, despite being released in 2019. Also, Fireboy DML was the second most-streamed Nigerian artist. That is, ahead of giants like Davido, Wizkid, and Olamide. On Boomplay, his debut album, Laughter, Tears and Goosebumps was Boomplay’s most-streamed of 2020. His sophomore project Apollo was the third most streamed. Both projects sandwiched Burna Boy’s Twice As Tall. Fireboy’s steady rise has been extraordinary.

On August 20, the 17-track album including early releases (ELI, Tattoo, New York City Girl) was released. Fireboy explained that “this album is about evolution, growth, love and pain”. During his chat with Ebro Darden on Apple Music, he mentioned that Apollo showed that he is not just a one-hit-wonder, but an actual musician that writes and is here to stay. Oh, we believe that.

In 2020, Fireboy was finally available for features. And wasn’t he just fire on them? Reminisce’s Ogaranya, DJ Cuppy’s Feel Good, DJ Spinall’s Sere, and Peruzzi’s Southy Love come to mind. Oh, and Scatter from 2019’s album was added to the soundtrack of FIFA 21.

Fireboy bagged a nomination for Best African Act at the 2020 MOBO Awards. He has now been nominated for Best Male at the MTV MAMA Awards, alongside Rema and Burna Boy. At the Headies, however, Fireboy DML leads the nominations with nine nods including Best Recording of the Year, Songwriter of the Year, Best R&B Album, Best Pop Album, Album of the Year, and the Headies Viewer’s Choice Award.

In November, he tweeted,

“This time last year I was holed up in my tiny room singing my guts out, not knowing if people would ever hear or even appreciate these songs. Fast forward a few months later, those songs came together to become an EP titled ‘Get Layd’ and that shit changed my life!!!

Years ago in Port Harcourt, Stanley Omah Didia began singing with rap group Lil King. He later dabbled in production before launching his solo career in 2019 with songs like Do Not Disturb and Hello Brother. In May 2020, Omah Lay released Get Layd, a five-song EP led by delicious, successful singles like You and Bad Influence. The following month, he became the first act to be featured on Apple Music’s Africa Rising. By the end of 2020, Bad Influence became the most streamed Nigerian song on Apple Music. The EP gained over 120 million streams.

In the summer, Omah Lay signed with Warner Music Group’s sire label. He released his latest EP, What Have We Done, on November 20 and returned to the top of the charts. For six consecutive weeks leading into 2021, Godly topped the TurnTable Top 50 charts. His only collaboration, with Olamide – Infinity remains the most-streamed track off Carpe Diem. From all indications, he is set to be named Next Rated at the 2020 Headies. He also received a nomination for Viewer’s Choice.

Omah Lay is the breakout star of the year. There cannot be a comparison. At the start of the year, nobody knew him. In the end, and only 11 songs (2 EPs and one feature) later, everyone did. Nobody. Nobody can fit relate.

And this brings us to the end of our 10 from 20 list. Oh, honorable mentions include Blaqbonez, Ckay, Zinoleesky, Buju, Superboy Cheque, Moelogo, T-Classic, Ajebo Hustlers, Jinmi Abduls and Laycon.

Did you enjoy our list? Who would you leave out or throw in? The comments section is open!