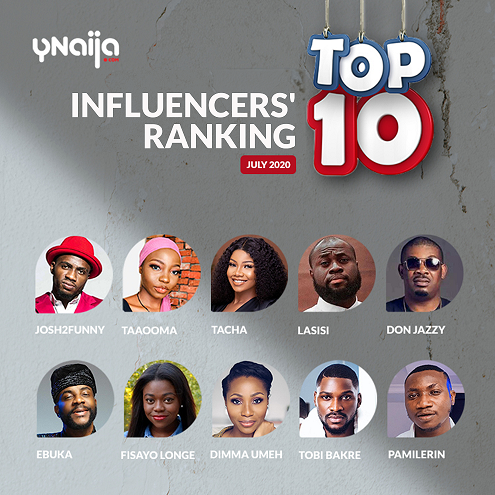 The month of July has seen the shine and rise of comedic skit makers on social media, who have given Nigerians respite in these trying times. We have seen a definite intention in the content produced by these influencers, with it taking a more pungent political voice. The top 10 Influencer ranking for July is a collation of familiar names that have set the trend and made a dent in the social conversation.

Here’s the influencer ranking for July:

Digital influencer, Pamilerin Adegoke, is known for his light-hearted nature on Twitter, but he took a morose turn as he delved into serious matters in an episode of #WithChude in July. He talked in-depth about his experience with depression and how he came so close to committing suicide.

He disclosed to the host, Chude Jideonwo, the importance of affirming relationships for the emotional and psychological healing of those dealing with mental health challenges, sparking a necessary conversation.

If there is one thing Tobi Bakre is known for, it is defying gravity. His eye-catching pictures featuring him posing in the air are always sure to get social media abuzz.

The Big Brother Naija 2018 finalist has consistently graced our TV screens and has been on the constant rise in the entertainment industry. He features in several YouTube series like Phases and Lara of Lagos. He’s also pulled in several endorsements, such as the most recent one with the Orange group.

YouTuber and content creator, Dimma Umeh was very vocal during the recent protests against rape and sexual assault in Nigeria; proceeding to share a moving speech and a list of foundations handling rape cases for interested individuals on her platform.

She also represented Nigeria on the Beauty Fest Africa platform, where experts were brought together to speak on diverse fields relating to the beauty industry and to share solutions to the problems in the African Beauty Community.

British-Nigerian fashion and travel blogger, Fisayo Longe, is the creator of the apparel line Kai Collective. The fashionista decided upon ‘Kai’ for the and name because it translated to ‘Wow!’ in Hausa and told the fun stories she was trying to convey in her designs.

Her stunning works were promoted by American Icon, Beyonce, as the entertainer displayed Longe’s fashion brand on her website alongside other black fashion brands. A series of celebrities and influencers have been seen donning the comfortable and quality designs such as the oddity, and musician, Saweetie.

Chukwuebuka Obi-Uchendu, popularly known as Ebuka, is a Nigerian lawyer and media personality.

Ebuka’s role as the host of the reality show, Big Brother Naija, as well as YNaija’s talk show, Rubbin’ Minds, has made him a significant player in the influencing industry. His fresh, regal fashion style is also a constant talking point for Nigerians. The charismatic presenter has been renewed as the host for the latest season of the Big Brother reality TV show and recently signed in a deal with BBNaija headline sponsor, Betway Nigeria.

Michael Collins Ajereh, better known as Don Jazzy or Don Baba J, is fondly seen as the godfather of Nigerian social media. His occasional giveaways, lovable personality, and humorous videos have endeared him unto the hearts of Nigerians.

The producer, singer, songwriter, entrepreneur, and philanthropist because of his massive influence has signed several prominent endorsement deals, including the most recent deal with BBNaija headline sponsor, Betway Nigeria.

The co-founder of the now-defunct record label Mo’ Hits Records took a pointed stance on Twitter against the reported fee hike for courier or delivery firms in Nigeria, drawing the attention of the supervising minister, Dr. Isa Pantami, to the outrageous fees.

Nosa Afolabi, popularly known as Lasisi, week after week, produces hilarious homemade skits for Nigerians. During the pandemic, specifically during the lockdown period, Nigerians looked to content creators to keep them engaged, and Lasisi consistently delivered.

He has convincingly donned several characters such as Sinzu Money, Spending, Mama Itohan, Jacuzzi, and, most recently, the ‘Atomic bomb.’ His videos, known to trend, always show a relatable, hilarious part of the Nigerian system.

His comedic depiction of Nigerian lawyers and doctors has, however, raised kickbacks from the professionals, some saying he was ridiculing the entire profession. These cries haven’t stopped Lasisi from entertaining Nigerians with fresh and creative characters in every new video.

Natacha Akide, popularly known as Tacha, did not win the Big Brother show but has practically won in everything else, tapping into a social currency that other ex-housemates could only dream of.

She was disqualified for assaulting her fellow housemate and season winner, Mercy Eke, but rather than the downward spiral many anticipated, she got more devotion from her fans. The fandom tagged as “the Titans” make it a point of call to ensure she trends daily. She’s pulled in titillating endorsement deals, ranging from Royal Hair, GetFit Technologies, Ciroc, amongst many others, it seems there is no slowing down the controversial reality TV star.

Her fanbase took Nigerians by surprise and announced that they were starting an online reality show to honor their star, Tacha’s legendary status. The reality show kicked off in July, and is a fan sourced reality television show that occurs on the Instagram platform.

Taaooma’s venture into the social media world of skit making was entirely by chance, she says. The famous skit maker said she needed to practice editing videos and so she started making videos as a result, she explained in an interview with CNN.

Since then, her growth has known no bounds as she’s continued to push viral videos that pointedly touches on societal issues in humorous ways. At the beginning of the pandemic, Taaooma used her skits to touch on the importance of staying safe, wearing masks, and simultaneously educating people that “spiritual defenses” are not enough. In the heat of the protests regarding the troubling accounts of rape across Nigeria, Taaooma also made a skit educating people on rape culture.

The 21-year-old Tourism, Hospitality and Event Management graduate, was featured in a CNN interview and served as the muse for Media Room Hub’s July Issue, where she opened up about her personal experience with sexual abuse.

Josh2Funny, also known as Josh Alfred, has been at the helm of many viral, humorous trends on the Nigerian space of the internet, but his latest “Don’t leave me challenge” has shot him into the global spotlight.

The 29-year-old released a humor skit playing on dry puns that went viral in June, with hundreds of social media users worldwide doing their version of dry humor in video uploads. The challenge had many local and international stars, such as veteran Nigerian actors like Olu Jacobs and Kanayo O. Kanayo, partaking in it and has since been viewed over 100 million times on social media platforms.

The comedian has shown consistency in his craft, wielding and perfecting a vast number of personalities such as Mama Felicia, Optununu, Gbas-gbos, TTP of the Consequence Boys, Bro Zakius, Think About It and Juga. His years of perseverance paid up big time as his viral video granted him an opportunity to be reported by Buzzfeed, CNN, BBC.

Most recently, Josh2Funny was featured as the cover of the Guardian Life.