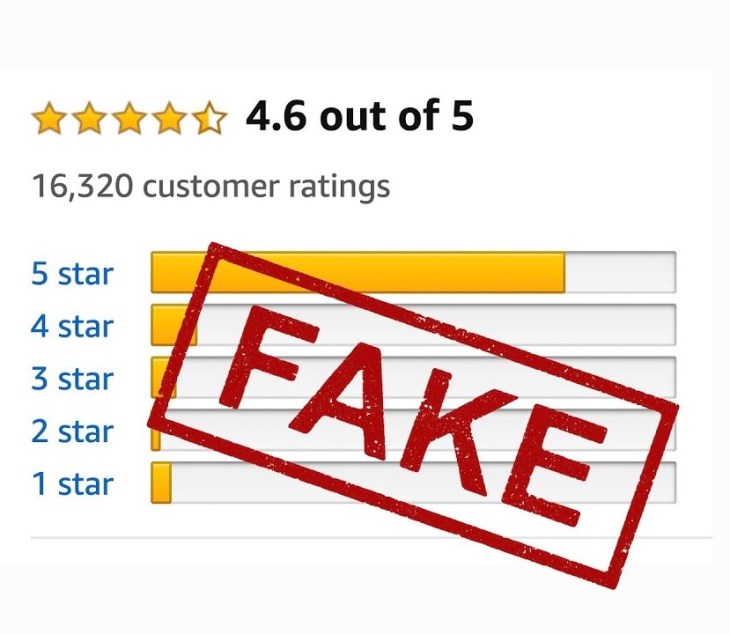 Perhaps one of the better things the pandemic year left us with is a strengthened e-commerce industry after the global lockdown forced more consumers to turn to e-commerce rather than in-person shopping. But with this gift, which promises new opportunities from a market that is increasingly global, comes an issue of concern threatening to cripple consumer satisfaction and in due course the very platforms –  Amazon, among other e-commerce platforms – that we trust to help us make informed purchasing decisions and get as much value as possible for our money. That problem is fake reviews — the proliferation of which a 10 months study by assistant professors Brett Hollenbeck at UCLA and Davide Proserpio at the University of Southern California along with Sherry He, a PhD candidate in Marketing at the UCLA, revealed not only harms buyers but the e-commerce platforms in the long run.

There is a huge market for fake user-generated reviews purchased by sellers in a number of ways – many of which observers are just beginning to understand – with the aim to boost their product rating, and gain more visibility, which in turn converts to increased sales. For the most part, it works. Yet this ‘marketing’ strategy raises more than one ethical concern.

Any PR strategist worth their salt knows that one of the key ways for brands to maintain their reputation, acquire and retain customers, is review monitoring. This involves tracking one’s brand mentions and consumer feedback across multiple platforms – which could include e-commerce sites – and working to maintain a positive brand image. This is essentially a customer-brand exchange that requires the brand to improve in areas customers raise issues with, offer customer service support, and address complaints in extreme cases by product recall and customer reward. This, therefore, is completely ethical, where review purchase is not.

To ensure customer satisfaction, e-commerce platforms like Jumia, Konga, and app stores like Google Play and Apple Store implement a rating and review system that helps consumers make their purchasing decisions with confidence. These reviews are tied into the algorithm of the platforms so that the higher a brand’s positive review the more visible they are and hence the more sales they are likely to get. This motivates brands – many of them generic or new in the market – to engineer their rating using fake reviews bought most commonly from Facebook groups where sellers recruit people to purchase their products and leave a positive review. The sellers then reward these ‘customers’ by refunding their expenses and sometimes paying them a commission in addition.

The aim of increasing visibility and sales is more often than not achieved. This study found that after deploying this unethical strategy on Amazon, these brands experience an instant bump in their sales rank of an average 12.5%, even if it doesn’t last. Real customer reviews eventually catch up to the purchased bump, and in most cases because the product quality was subpar to begin with, the negative takes over the positive quickly. But the harm to customer trust has already been done – for the brand as well as the platform because customers trust these platforms to ensure the reviews on their pages are true to the product on them. But there is more harm that fake reviews cause that is even more sinister.

The job of PR strategists is doubly complicated here. To stick to their guns and remain ethical by monitoring and addressing negative reviews alone or also dabble into fake review purchasing to offset the subtle but very effective attack on their brand of interest?  Yet this isn’t just on PR agencies, these platforms have an important role to play, and many of them are doing just that, but they have found out that combating fake reviews goes beyond them also and may require legal frameworks to combat it.

Because fake reviews erode customer trust in the review system of e-commerce platforms, more of them are working hard to address it internally. Yet what they do is often too little, too late, or both.

For instance, according to the latest transparency report of Tripadvisor, the company removed or rejected nearly 1 million fake reviews from its platform and identified a swathe of new sites selling bogus reviews in 2020.

In 2019, Amazon spent more than $500 million and employed more than 8,000 people to reduce fraud and abuse on its platform, said a statement by Amazon spokesperson Patrick Graham.

“We have robust proactive and reactive systems in place to protect our store and our customers,” Graham said.

This study found that Amazon was in fact deleting around 40% of these fake reviews — but it took them an average of more than 100 days after a fake review was posted to remove it, long enough for customers to have fallen for the con.

But if customers stop trusting the review system, which research shows is the most important factor in purchase decision-making after price and shipping, the system risks collapse. A lose-lose situation for everyone.

The platforms are doing something, but it isn’t enough.

Bodies like the Consumer Protection Agency may need to step in to increase the motivation of these platforms to do more and faster.

This precedent, where the UK competition watchdog, the Competition and Markets Authority, investigated Amazon and Google to determine whether they did enough to counter the menace of fake reviews and if not whether they have broken the law, is a good guide on how to go about this at policy level. These of course are no quick fixes and brands and consumers alike may need to keep a wary eye on reviews and expand the list of determining factors for every purchase they make online.

The market for fake reviews will likely thrive for a while yet since it proves to be effective for many obscure brands, the cost to the dependability of the review-rating system on the other hand is something platforms, and policy-makers must rush to salvage in the interim.