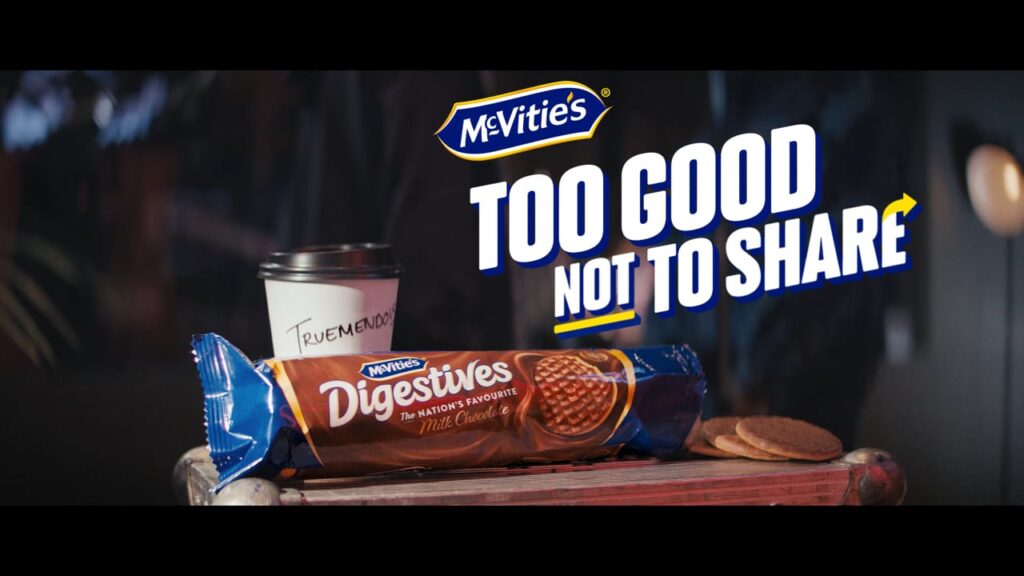 With elements of surprise, enthusiasm, and a focus on human connection all rolled into the commercial, the McVitie’s ‘Too Good Not to Share’ ad defies the norm — which is that a typical person, when given a delicious food or snack, would typically want to enjoy it alone. The ad reveals that McVitie’s biscuit is so good that after trying it out you would want everyone around you to also have a taste of it.

The 40-second ad shows a teenager who takes a bite of McVitie’s Chocolate Digestives and finds it so enjoyable, she saw a need to share the pack with anyone that comes her way.

She runs upstairs to meet her gamer brother who has a “Keep Out” sign on his door. . After trying out the biscuit, he  found the McVitie’s Chocolate Digestives so good that he  abandoned his game despite calls from his gaming partner who was wondering what he was up to.

The McVitie’s gamer ad clearly targets the younger customers, using apps such as TikTok and Instagram to show their audience that eating their biscuits can be fun and cool.

What’s the message? It is clear and direct. McVitie’s ‘Too Good Not to Share’ campaign focuses on the power of sharing and connection and the dynamic role biscuits can play in bringing people together.

Emma Stowers, Brand Director for McVitie’s at Pladis UK&I, noted that shoppers tell them that their biscuits are so inexplicably tasty, they can’t help but share them.

“It’s this insight that inspired our Masterbrand campaign and is brought to life with our two new TV creatives.

“We’re really proud of the fact that our biscuits continue to give people across the UK an opportunity to connect with one another, particularly during this very difficult year. We’re excited to be bringing our range of bestselling biscuits to a new generation of Brits with our latest campaign.”

Pladis is UK’s largest biscuit brand and now one of the world’s leading snacking companies with brands including McVitie’s, Ulker and Godiva Chocolatier.

Pladis delights consumers with products across the snacking category including sweet and savoury biscuits, wafer, cake, chocolate, gum and candy. The company has a 26,000-strong global workforce in 34 factories in 13 countries, with annual revenues of £2.2 billion.

The company has already delivered a series of successful product innovations in the biscuit and chocolate categories since the group was created, which include Godiva for retail, McVitie’s Nibbles, and McVitie’s Chocolate Digestive Thins – products which have fast become firm favourites in Pladis’ anchor markets.

The adverts ran for one month across TV, video-on-demand (VOD) and social media platforms Facebook, Instagram, and TikTok, important channels for reaching the target 18 to 44 years old audience to drive incremental sales among the younger consumers. To further push the ‘Too Good Not to Share’ theme, McVitie’s made use of a promotion which entails buying any pack of McVitie’s biscuits or cake products, and if lucky, the buyer will have the chance to win a year’s supply of their favourite McVitie’s biscuits.

McVitie’s also announced on TikTok in April that it is sponsoring a game of talents because everyone has a hidden talent. The winner stood a chance of winning a year’s supply of biscuits by sharing a TikTok video that is just ‘Too Good Not to Share’ using the hashtag #TooGoodNottoShare. The competition started on April 13 and ended on May 12.

The McVitie’s gamer ad is the second of McVitie’s new TV ads. The first, which was on screens in late 2020 also shows how people can’t help but share Chocolate Digestives.

To also reinforce the campaign’s theme of sharing and connectivity, there was a giveaway of 20,000 packs of McVitie’s Chocolate Digestives. Customers were encouraged to nominate a friend or relative who will be gifted a pack for every follow and retweet of the #TooGoodNottoShare posts.

The brand also got a new look, featuring bold new typography and depicting the silky-smooth milk chocolate which coats every biscuit.

The campaign was managed by TBWA London, a company that creates disruptive ideas that locate and involve brands in culture, giving them a larger share of the future.