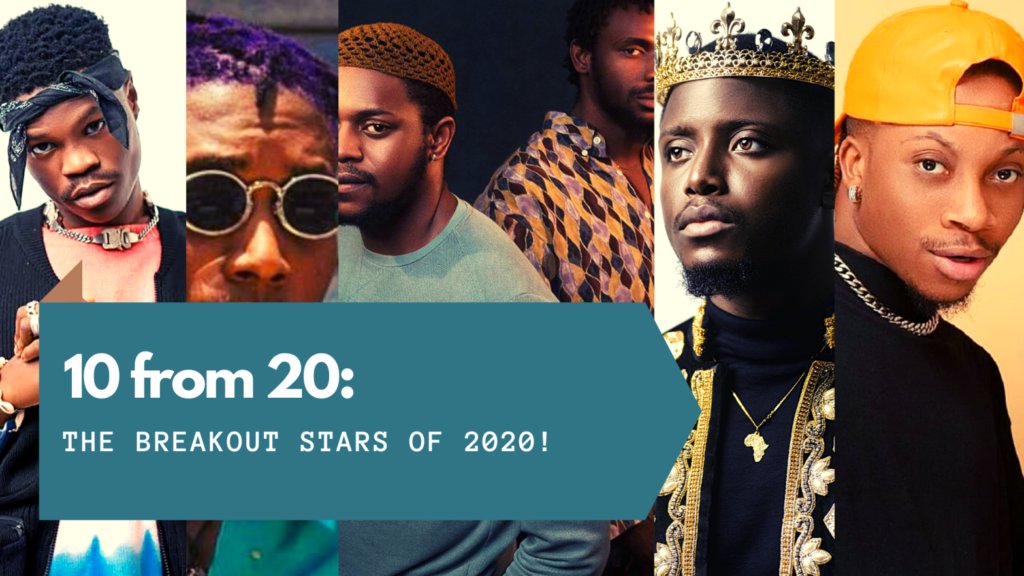 When 2020 wasn’t ending lives, it was limiting livelihood. For instance, lockdown meant restrictions on movement, a crackdown on gatherings. Artists could not make money from concerts, tours, and social events. So here is what they did instead – they released albums! In 2020, albums became fashionable again. All our faves dropped a long play (LP) or extended play (EP). Also, the heavy reliance on digital platforms to distribute music meant that everyone could get their sound to you. We were home to stream more music in 2020. So we played track after track and found new obsessions. The year gifted front row tickets to otherwise unpopular artists. It was easy!

Our list celebrates the breakout stars of 2020. Young, relatively new artists who rose from obscurity (at least, some of them) to ubiquity within the 12 horrid months 2020 threw at us. Obviously, it was only horrid for some of us. The 10 artists on our list will always remember 2020 fondly. So here it is, in no particular order.

Just kidding. There is an order. Go figure!

Abiola Akinbiyi is a 400 level student of Lagos State University. Yet, he already has a Headies nomination for Next Rated Artist. He rose to prominence in 2019 with Vision 2020, one song that voiced out our collective troubles as young people with failed government promises, the weight of expectations, and endless struggles. Well, it was Vision 2020 for Bella, wasn’t it? Acclaimed dancer Poco Lee, posted Bella’s video on social media, Olamide reached out for a remix and ta-dah!

In 2020, Bella Shmurda released his debut project – a seven-track EP titled High Tension. His message was the same – the struggle on the streets and his emergence as a celebrity. The acceptance was the same as well. According to the artist, High Tension did 2 million streams overnight. Soon, he featured on Runtown’s Body Riddim. Seven months after his EP, Bella returned with a bold tune, Dangbana Orisa.

It all began to look its brightest when we found Bella in the tracklists of internationally renowned artists. Like play, like play, Bella Shmurda sang the hooks in Olamide’s Triumphant and Davido’s Fade. Did we say brightest? Because we did not see Cash App coming. An eclectic track that highlighted the path of cyber-criminals, released in the middle of a protest against police brutality. Not the best timing. But when you’re big, you’re big.

And Cash App is big. Into the new year, it held its peak of No.3 in the radio airplay charts. Bella says he has an album coming, one titled Hyper Tension.

Chike-Ezekpeazu, at 27, is the oldest star on our list. On Thursday, the 28th, he will turn 28. But he has come a long way, hasn’t he? Before 2020, he was most popular for his participation in The Voice Nigeria Season 1. He finished runner-up on the show. Before then, he made the top 10 of MTN’s Project Fame in 2015. A lot happened after these, including a stint with Universal Music that didn’t quite work out.

In 2018, Chike released the first single off his album titled Beautiful People. Immediately the 14-track Boo of the Booless was released (on 14th February), it racked up streams and rose to number 1 on 19th February. To many, Boo of the Booless ranks among the best albums Nigeria has ever seen. That is, if synergy and replay value are defining criteria. Dance of the Booless, an EP that contained producer remixes to Chike’s album, was released in June.

In December, Chike was nominated for the Future Awards Africa Prize for Music. Chike has four nominations at the Headies. He has been nominated for Best Vocal Performance (Male) as a nod to his range in Forgive. Boo of the Booless received a nod for Best R&B Album and Album of the Year. Chike also bagged a nomination for Hip Hop World Revelation of the Year.

Oh, hasn’t he been a revelation?

When Kingsley Okorie (guitarist) was called to the Nigerian Bar in 2016, he shed a tear. It wasn’t one of joy, no. “It was one of the saddest days of my life. I already had my first performance before that so I already knew Law was not it.” He had spent the year at Kano Campus of the Nigerian Law School. He would look around during rigorous classes and feel like a “caveman”.

His younger brother, Benjamin Okorie (drummer), was studying music at the Peter King College of Music and then at the Society for the Performing Arts in Nigeria. Brothers reunited in March 2018. They began as instrumentalists, playing for established acts like Ruby Gyang, Asa, Bez, Onyeka Onwenu, and Lady Donli. It is The Cavemen’s production magic all over Enjoy Your Life. Yes, it is them in Cash.

The Cavemen’s debut project, Roots, was released in August 2020. Deep title, it. The highlife genre reminds the young generation of their roots. Themes of love, hurt, and uncertainty; singing in Igbo, Pidgin, and English both remind us of home. No matter where you are, you are home if you still remember what it feels like. You are home. Although born and raised in Ogudu Lagos, they mostly sing in Igbo, a language they can barely speak.

MJ was some hit song, wasn’t it? Released during the zenith of the pandemic, it reminded us to live, to dance. Not despite the uncertainty but because of it. MJ was remixed with Mayorkun, then with Teni. Both saw commercial success and a long stay on the charts.

Only a year before, Olorunyomi Oloruntimilehin was still posting freestyles and covers on social media. One caught the eye of British rapper, J-Hus. Skits began to go viral and offers began to come. He signed with Anonymous Music in 2019. Before MJ, Timz dropped two singles and a six-track EP called TIMZ. The entire time, he was a student of Computer Engineering at Bells University.

In October, Olamide’s Carpe Diem was released to audiences that were preoccupied with #EndSARS protests. It was the most unfortunate collision for him, wasn’t it? Regardless, some tracks off that album survived the tumultuous period and the months after to be certified as hits. One was Loading, where he featured who know you. It peaked at number 13 on Billboard’s charts and stayed for a fortnight. In December, it was the most played song on Nigerian TV stations, racking 11.05 million airplay audience impressions in one week.

“Words really cannot describe how I feel right now, putting this project out means the whole world to me, my entire essence, existence, and life right now centers around this project…”

“Oxygene” is a double entendre. It is a representation of how important music is to Oxlade – it is his Oxygen. It also speaks to his relationship with a certain, estranged lover. Oh, it is also a play on his nickname “Oxy” and the biological “gene”. The project is Oxlade’s authentic gift to us. And boy, we loved it. Oxygene was released on March 27, 2020. It immediately became the most streamed album, surpassing Fireboy’s persistent LTG and Chike’s breakout Boo of the Booless.

Ikuforiji Olaitan Abdulrahman began music in secondary school, much to the disapproval of his widowed father. He gained admission to study History and International Relations at Lagos State University but dropped out two years later. Although he had released Shugar and sang opposite Fireboy DML in Sing, he almost quit music in 2019 until his hook on Blaqbonez’s Mamiwota drew attention. 2019 was good to Oxlade, culminating in performances at the 02 Academy and 02 Arena.

2020 was better. Oxlade signed a distribution deal with The Plug Media. Oxygene happened. In December, Away made Rollingstone’s 50 Best Songs of 2020. He has now been nominated for Next Rated at the Headies awards.

This is 5 out of the 10 we promised. Here is a break. Our list continues in the next post! What do you think already? Who should make it to the top half?