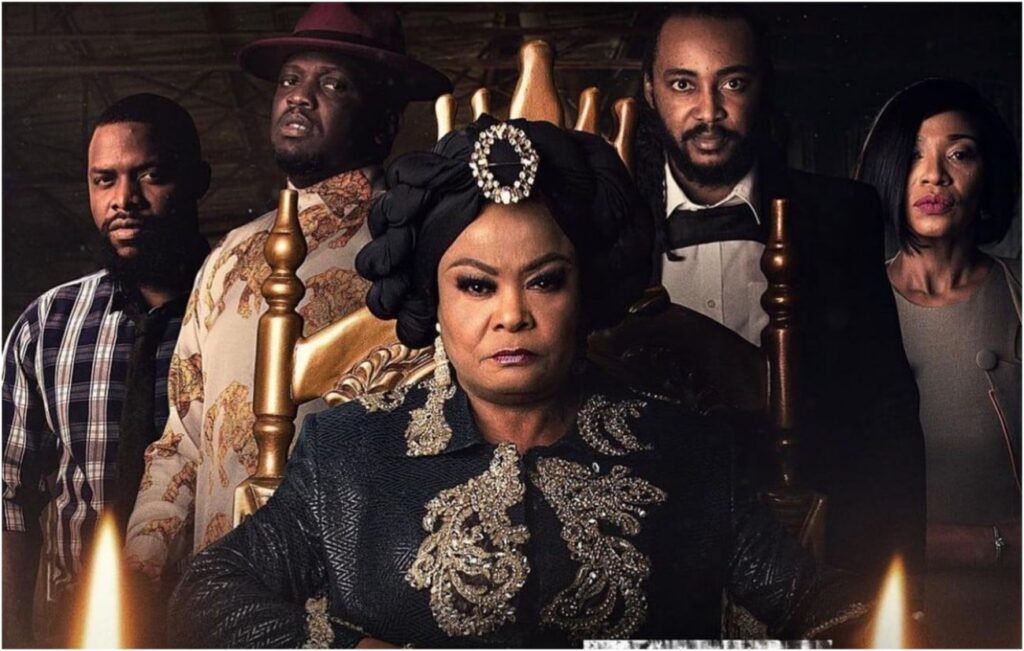 It could be a toast to the story of the century being published, at last. A casual conversation about what is best fitting for the imminently elegant Nse Ikpe-Etim to drink while discussing power-play – the kind that could bring down a country if it so wishes – with the formidable Akin Lewis. The art of product placement is a nut even seasoned experts in advertising often struggle to crack.

You have heard it said or read it somewhere, how much the attention span of humanity continues to dwindle thanks to access to increasingly shorter forms of entertainment – think TikTok for instance.

People want to waltz in, have their attention grabbed and held on to for a handful of seconds, and be entertained by that quick rush of fun. They don’t want to sit for 3 hours to watch a whole movie for a satisfaction they believe they could get from, say, binge-watching the TikTok videos of Iyabo Ojo. Then Kemi Adetiba happened.

King of Boys – the movie, was in and of itself a masterpiece of artistic excellence. That a streaming giant like Netflix will hedge its millions of dollars’ worth of bet on it, taking that story and making it into a limited series is a testament to its strength as a work of art.

Now elevate that line of thought a little.

Consider that King of Boys: The Return of the King, is Nigeria’s first-ever Netflix series.

When South Africa was having Queen Sono, then How To Ruin Christmas: The Wedding, all Nigeria had was Chief Daddy, The Wedding Party 1& 2 and Oloture – all fantastic entertainment offerings that were nevertheless NOT a series, limited or otherwise. Netflix betted on THAT.

It is arguably the story of the century, born by Kemi Adetiba and carried on the unbreakable back of the legend-solidifying Sola Sobowale with the perhaps unintended consequence of carrying Nigeria’s Nollywood into a new never-before-seen realm of success – the realm of the dearly loved TV series.

If you ask even experts in the entertainment field, ‘What is most profitable? TV or Movies?’ The answer you are most likely to get is, ‘It is anyone’s game, really.’

Movies have the trick of – if they are wildly successful – raking in billions of dollars in profit. King of Boys the movie raked in nearly a quarter-billion Naira in Box Office earnings.

TV – and serial movies by extension – are huge on raking in ad money. Take CBS’s megahit Big Bang Theory, for instance, while its run was on, it raked in advertising revenue per half an hour at $2.75 million.

The experts will ask, ‘How do you place your product or brand in front of an audience you hope to become your loyal customers whose attention span is fast dwindling and not make it too aggressive?’

You don’t want every space occupied by your characters to be inexplicably splattered with brand insignia – the Coca-Cola way in Namaste Wahala. They will see it, many may even be inspired from watching that frame to consider buying your product next time they crave soda, many still who are already fans will be compelled to revisit and satisfy their craving for your product, but that doesn’t make them raving fans.

A TV series makes subtlety possible. A beloved TV series, like this fan-favourite – King of Boys: The Return of The King, makes making raving fans of your customers easier than you think.

A King presides while giving Access to Legends to flourish. That sentence is how I pictured a writer’s room conversation about how best to positions some of the brands that popped up here and there in the latest King of Boys. None of which is cloying.

You have a happy writer toasting a story he thinks will shake the political sphere, with a bottle of Guinness beer. Perfect.

You have Nse Ikpe-Etim swilling Legend beer, a break from the perfection of her character, First Lady Jumoke Randle – a break we will come to learn is in line with her character’s history of being for the streets.

These instances are so natural and unforced they leave an unintrusive imprint on the viewer’s mind. Do that for 7 episodes, and your raving fans will by then be engaging not just the entertainment offering but also your product with it.

A bottle of Legend or two may have been drunk while this writer watched the final episode of King of Boys on Netflix.

Think about the contrast. Laburu herself bringing down the roof with her power-projecting Yoruba adages and forceful voice, a swig of chilled beer washing down your excitement, and just sheer joy for the moment. The recipe doesn’t make itself, but when it is made you feel it.

Kemi Adetiba has not just launched a new revenue stream for Nollywood – Nigerian TV series will now make their fair share of that sweet streaming revenue and not have to make do with what is possible with local TV stations – she has also opened revenue streams across industries.

From banking to the food industry to politics – if its players have the presence of mind to learn a thing or two from Eniola Salami being not only a wily power-grabbing genius but also a human being who embraces her own into glory. Loyal to her dearest and ferocious to her enemies.

And the fashion and styling industry as it pertains to the movie industry? King of Boys didn’t just finish work, it set the agenda and delivered fully plus additional razzle-dazzle for the road so doubters can shine their eyes.

Future films may want to ask Ms. Adetiba what the secret is for balancing so perfectly all these elements and coming through like a force of nature to remind everyone what is possible when one is determined to create magic.