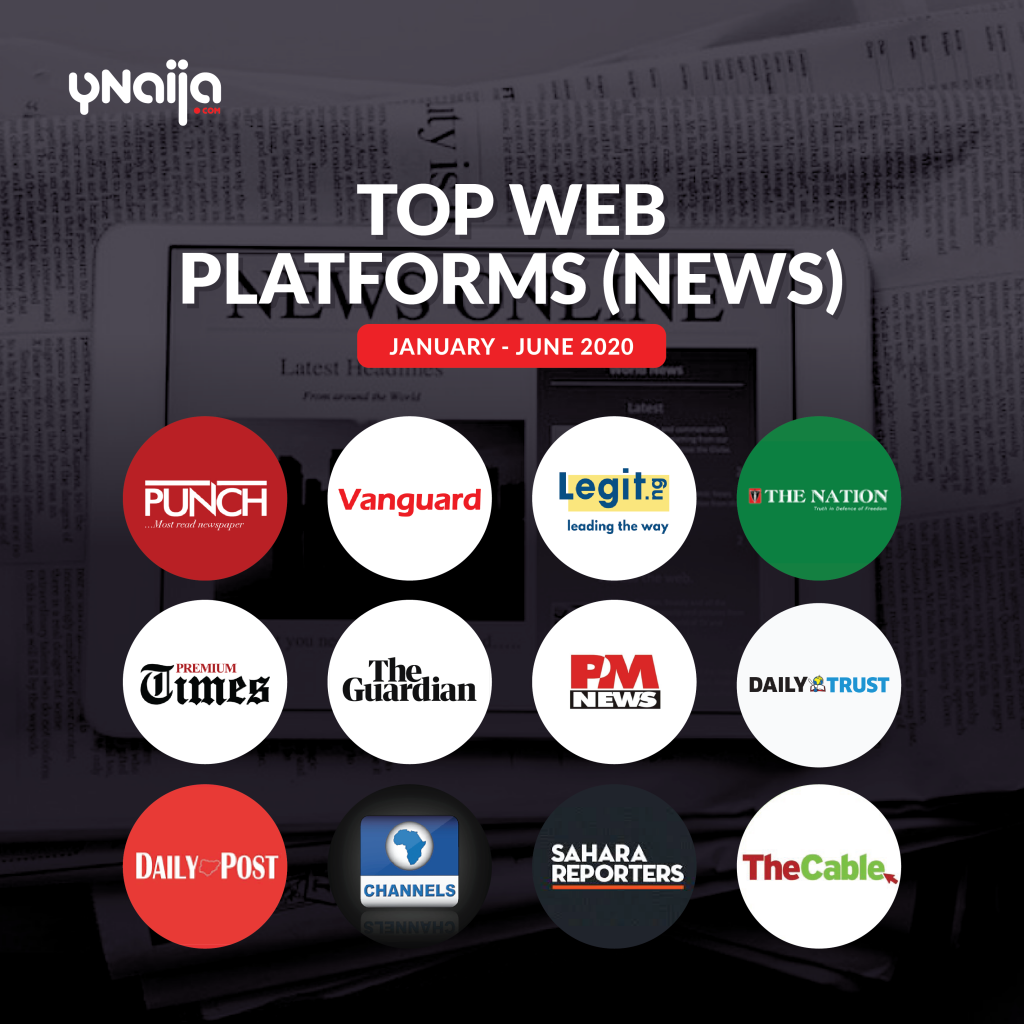 News outlets are continually engaging in the never-ending struggle of breaking the news first, creating the best content, and attracting the most extensive viewership.

There are a plethora of news media platforms in the vast Nigerian online content ecosystem. From the churn, we have collated two separate rankings of the top 10 news media web platforms for the first half of 2020 based on viewership, traction, influence, quality, and brand they have.

Ranking based on viewership and influence

10. Daily Trust
The Daily Trust holds considerable influence on the internet-sphere, raking in over 100,000 daily views on its website. The platform also poses a laudable stance on its social media platform, creating concise and fresh news content for the Nigerian audience.

9. Channels TV
Channels TV wields presence on television, online radio, social media, and also in the podcasting world. This conglomeration of mediums adds to Channels’ influence as a go-to news platform. The news media also rakes in over 100,000 daily views on its website, but its impressive social media presence gives them an edge.

7. Guardian
The Guardian has built a reputation as one of Nigeria’s most respected newspapers. The web platform can boast of an approximate 140,000 daily views. The paper can also boast of a tasteful outlook on its social media platforms, presenting eye-catching and engaging content for the Nigerian audience.

6. Premium Times
Premium Times, a notable online newspaper, garners an impressive approximate of 300,000 daily views from Nigerians. It is ranked 3,570 on Alexa rankings.

5. The Nation
In a 2011 report by The Advertisers’ Association of Nigeria (ADVANS), The Nation daily newspaper was listed as the second-most-read newspaper in Nigeria, and this finding mirrors the readership the platform garners daily; with an estimated 376,438 daily views. It wields a formidable social media presence and is ranked 2,738 on Alexa rankings.

4. Vanguard
The daily newspaper has, over time, built a considerable online presence, ranked 1,841 on Alexa rankings. Vanguard’s online web platform is also estimated to bring in over 500,000 daily views. The news media also makes active use of its social media platforms to engage Nigerians with its news posts.

3. Daily Post
Daily Post is determined to be one of the top news sites in Nigeria, with over 700, 000 daily views on the site. It is ranked 1,841 on Alexa rankings. However, its presence on social media, specifically on Instagram, requires considerable improvement.

2. Punch
Punch newspaper does an impressive job of delivering quality content on all its platforms, including its physical papers, on its web platform, and social media as well. The news media platform is ranked 1,191 on Alexa rankings, garnering close to 800,000 daily views on its website. Not only that, but the organization also makes active use of its social media presence, providing Nigerians timely news in very engaging ways, including a daily comic series on Nigerian politics title cartoon flakes.

1. Legit News
Legit news, formerly known as Naij.com, relies on technology and using analytical tools to drive their content. The website can boast of a whopping 1,170,000 million daily views on their website and is ranked 839 on Alex rankings. The news site also makes excellent use of its social media presence on all major platforms, being one of the very few news sites to make a mark on the video-sharing platform, YouTube.

Ranking based on quality and brand

10. Nation
The Nation daily newspaper is lauded as one of the most widely read newspapers in Nigeria and garners an impressive amount of viewers regularly. The Nation is considered a legacy brand, regarded as one of the leaders in the news industry. It wields a formidable social media presence and provides reliable reportage on a wide range of topics, including business, economy, public policies, the democratic process, institutions of democracy, and sports.

9. Vanguard
The first copy of the Vanguard newspaper hit the newsstands on Sunday, June 3rd, 1984, and has since then expanded its wings; adapting to the changing times. The daily newspaper soon set up an online extension and has overtime amassed a dedicated following. The online platform has been on the front-end of the political news sector, bringing Nigerians the steaming dramatic happenings in the nation’s political world.

8. Legit News
Legit news, formerly known as Naij.com, is a technology-driven media. The platform leans towards breaking real-time, relevant reports using analytical tools, which is why it is no surprise they have amassed such a large and active following amongst Nigerian audiences. The news site also makes excellent use of its social media presence on all major platforms. It is dominant in online spaces, with massive readership and an engagement routine for readers.

7. Guardian
The Guardian, an independent daily newspaper, possesses a formidable online presence and is usually considered as “Nigeria’s most respected newspaper.” The news media had built a reputation for publishing high-quality journalism in Nigeria alongside thoughtful, in-depth editorial content. Guardian possesses sharp reportage on cultural and lifestyle stories and is also considered a legacy brand.

6. Daily Trust
The Daily Trust is published by a privately held Nigerian newspaper company, Media Trust. It is one of the leading media companies in Nigeria, and the web platform provides timely, accurate news content for the Nigerian audience. Daily Trust also wields considerable influence on the internet, on all major platforms. Its content is also republished by platforms such as AllAfrica and Gamji.

4. Channels TV
The versatility of the Channels news platform is quite impressive, boasting of a substantial presence with an online radio, TV station, and a formidable online news site. Its primary focus is producing news and current affairs programs on Nigerian domestic issues. Channel’s consistently acts as a watchdog on governmental policies, and there is an interpolation of various media forms on the channel’s site to keep audience members entertained and informed. The news media platform provides Nigerians with viral videos on political happenings and can also be considered a legacy brand with legitimacy amongst Nigerians.

3. Punch
The Punch, a daily newspaper and a legacy brand, also runs an online platform that consistently delivers objective reporting on topical issues. The paper has shown to prioritize accuracy over sensationalism and drawing in a massive audience. The news platform also actively engages with its audience using it’s social media platforms on Twitter, Instagram, and Facebook. Punch does an excellent job of telling news stories of the various aspects of the Nigerian industry, feeding Nigerians with poignant editorial pieces. The platform also poises authoritative views and gives comprehensive coverage of local news and events.

2. The Cable
The Cable is an independent online newspaper considerably known for being the first to break major news stories and for their strength in investigative journalism. The paper was the first to declare that Akinwunmi Ambode will become the governor of Lagos state, to showcase President Muhammadu Buhari’s ministerial list, and to reveal the news of the divorce case of Chris Oyakhilome, leader of Christ Embassy church, and Anita, his wife. It is a strong brand that provides a mixture of culture and authority.

1. Premium Times
Premium Times is a renowned medium that is notable for its investigative journalism and independent views. In November 2017, Premium Times was awarded the Global Shining Light Award, Global Investigative Journalism Network, for its investigative work on the extrajudicial killings in Nigeria’s South-East and the report on how the Onitsha Massacre of Pro-Biafra supporters was coordinated. The Premium Times Centre for Investigative Journalism (PTCIJ) was also founded to promote an independent media landscape that advances fundamental human rights, good governance, and accountability in West Africa through investigative journalism, open data, and civic technology. This platform launched two websites tagged, DUBAWA and UDEME, which is aimed at providing accurate information to people and to deepen the democratic space.