The 100 most interesting things in politics, culture, and social influence this year 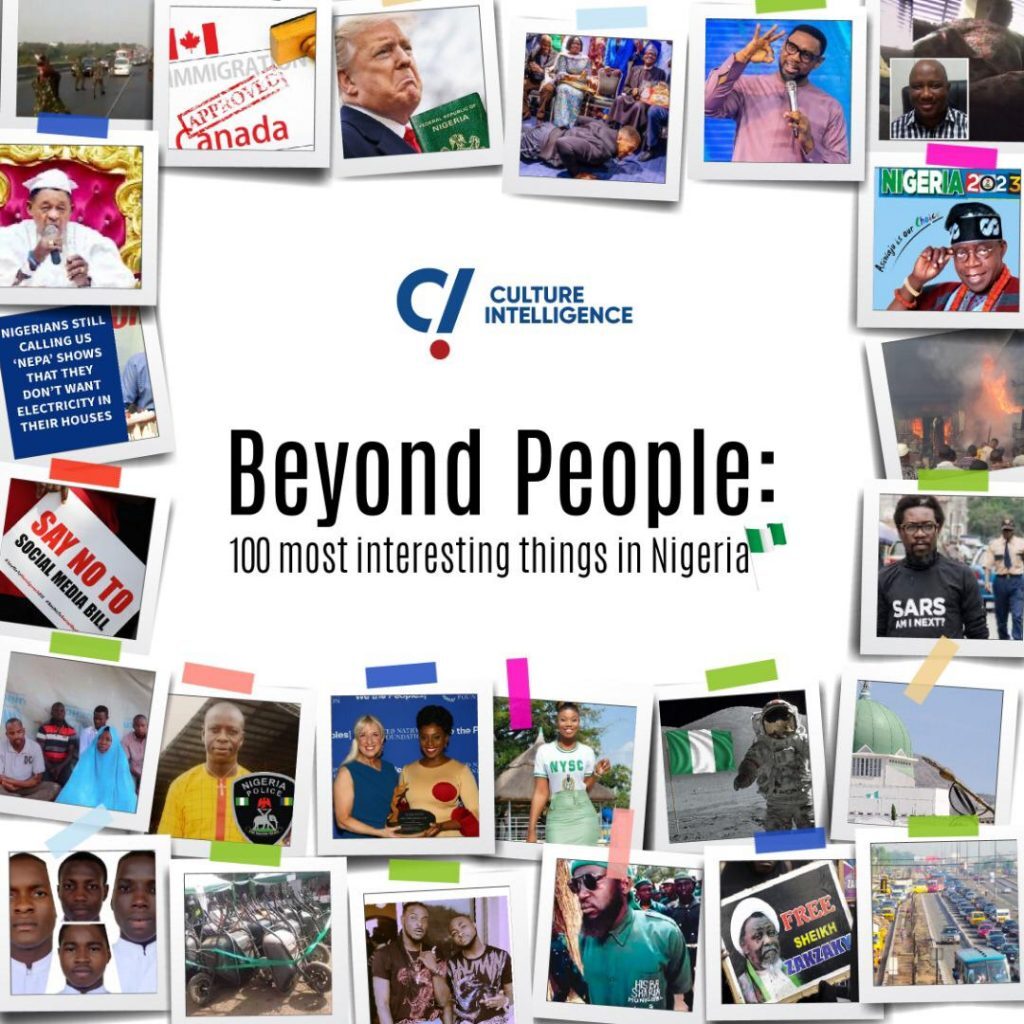 In the whirlwind of events that seems to accost us from every sphere of our lives, it’s easy to completely tune out and just take things as they come. Trends come and go, we hear of the new popping restaurant or amusement gaining momentum online and offline. It’s easy to get overwhelmed by the sheer volume of things, place and trends that we are assaulted with.

But not everything is just white noise, and at Culture Intelligence, we’ve curated a list of 100 things that you should pay extra attention to as they can truly enrich your experience as a visitor or a resident of the country. This is our list of 100 most interesting things in Nigeria.

CANADA IS THE NEW ‘MOVE ON’ DESTINATION

Since President Muhammadu Buhari took power in 2015, early skeptics began to leave the country in droves, convinced the new president still held archaic views he had implemented in the ‘80s and would try to do that again. Not quite convinced, the majority of Nigerians chose to give the new president a chance and see what he would manage to accomplish.

One interminably long recession later, too many Nigerians have their answer. They are all liquidating resources, sitting for IELTS, and applying to their dream schools. Canada and much of Europe beckons for the hungry Nigerian professionals fearing for their lives in an increasingly theocratic government and willing to switch allegiances. With total disregard for freezing weather, many young Nigerians are leaving for better education, healthcare, lifestyle, and securing a better future for their children.

The Nigerian Twitterverse has never been shy about its opinions regarding the current US President who has consistently been a trending topic in the country. According to data revealed by the Pew Research Centre, about 58 percent of Nigerians have confidence in Donald Trump’s capacity as a global leader, even while he maintains an average of 35 percent job approval rating in his own country.

While international confidence in Trump’s handling of world affairs has waned over the course of his first term, fueled by his discriminatory policies towards Islamic nations and countries he considers as sympathetic to Muslim concerns, most Nigerians believe Trump “will do the right thing regarding world affairs”.

During President Buhari’s meeting with Nigerians in London, which was held during the inaugural UK-Africa Investment Summit in January, the President congratulated Nigerian born boxer, Anthony Joshua for regaining his world championship belt, as well as putting Nigeria “on the world map again like Hogan Bassey.”

In a show of respect – as is customary in his tribe, he prostrated before the president. The gesture drew a lot of praise from people loyal to the president while the president’s critics hit Joshua hard for giving that much respect to an “underperformer”.

THE RETURN OF BIODUN FATOYINBO

Biodun Fatoyinbo seemed to have had it coming. He was first accused of abusing his position of authority to proposition church workers in Commonwealth of Zion Assembly (COZA) and promised to give a ‘robust response’ when accused by his consensual sex partner.

That robust response was yet to be received when another high profile Nigerian, celebrity photographer, Busola Dakolo sat with Chude Jideonwo to narrate her personal experience with the pastor and officially accuse him of rape. Causing a national maelstrom and nationwide protests that forced the Pentecostal church in Nigeria to intervene and Biodun Fatoyinbo, the accused pastor, to take a leave of absence from leading his church, many felt some kind of justice had been served.

It would seem many of us were naive. Fatoyinbo would eventually return to his congregation after an aggressive repair campaign that included compromised clothing, bought religious leader, and a fanatic congregation. Intimidation of his victims has followed since his reinstatement, and faith in the Nigerian justice system has waned.

In October 2019, #SexForGrades, an undercover documentary was released exposing an under-reported culture of sexual deviance, coercion, and abuse of authority by some Nigerian lecturers who bullied students and forced them into sexual relationships in exchange for a passing grade. The documentary made by journalist, Kiki Mordi forced the Nigerian legislature to reintroduce a Bill to punish university lecturers who are caught harassing female students.

It turns out only a small fraction of lecturers were exposed. The documentary triggered a series of actions that led to the outing of an OAU lecturer named Bisi Olaleye as a serial abuser who coerced female students into sexual relationships and was described as a sexual predator on social media. Under the hashtag #OAUTakeBisiOut, people took to Twitter to call for his removal from his position.

While the party leader is yet to confirm his intention to run, conversations about the possibility of the former governor contesting for the Nigerian presidency in 2023 have begun in earnest. Two billboards with the inscription ‘BAT 2023’ were mounted a few meters from the Lagos State Government Secretariat in Alausa, Ikeja last July, sparking outrage from citizens who felt four months post general elections was way too early for campaigns to begin. A group called the ‘Asiwaju Reloaded Ambassadors’ continued to share pictures of caps, T-shirts, and even leaflets with Bola Tinubu 2023 embossed on them.

After a brief meeting with President Buhari on 7 January 2020, Bola Tinubu said that it is too early to speak on the zoning of the presidency ahead of the next general elections in 2023, maintaining that “it will be mere restlessness to talk about it now.” His non-committal answer lends credence to the belief that he intends to contest in 2023.

THE FUTURE OF CITIZEN ACTIVISM

Two days before Christmas, a member of the House of Representatives and club owner, Shina Peller, was arrested by the police and detained at the Maroko police station. Peller’s team put out a statement declaring that the Nigerian Police had falsified accounts surrounding his arrest and detainment and called on other politicians to pressure the Police to release the legislator.

Many Nigerians believe that he was eventually released only when Segun ‘Segalink’ Awosanya intervened. As a civilian with no political affiliations, ‘Segalink’ has become the single most powerful activist in the country. His tenacity and understanding of the legal framework that guides policing have seen him intervene successfully in police cases across the country, winning countless victories for helpless citizens. He is the avatar of citizen activism and has inspired many young people to take on the government and other oppressors legally challenging the legitimacy of their actions and forcing change. Journalists like Kiki Mordi and Fisayo Soyombo have had their activism driven projects receive similar responses.

It will be interesting to see how it goes this year.

Sunday Oduntan, executive director of research and advocacy, Association of Nigerian Electricity Distributors (ANED) said in a statement that Nigerians should stop calling the organization ‘NEPA’ if they want electricity. Of course, this quickly became a trending topic on social media, although it is yet to be confirmed whether Nigerians finally succumbed to his ‘threats’.

AN ARSONIST ON THE LOOSE?

Between October and November 2019, it went from a rare and often disastrous occurrence to a routine phenomenon, happening at least once a month in a different state. There was a fire at the famous Onitsha Market, and then two different situations at the famous Balogun Market in Lagos. On October 17, 2019, fire disaster wrecked the Ochanja market in Onitsha, Anambra, following an inferno that engulfed the bustling commercial city east of the River Niger.

Many other fire outbreaks started from defective pipelines in several towns. As many seek to make sense of the carnage, some have suggested that the country may be dealing with an arsonist unafraid of the consequences of getting caught.

SEPARATING CHURCH FROM STATE IN KWARA

Religion is woven into the very fabric of Nigerian life. Prayers are said in schools and government offices, events are flagged on each end by a word of exhortation by a religious leader, God is invoked in business transactions and contract signings.

But a Kwara State Government finally free of the influence of the Saraki family seems to want to divest itself of all external influences, including spiritual ones. On January 14, 2020, the government took a bold step to ban preaching in public schools across the state. An act of bravery that will only matter if the government actually enforces it – but will they or will the costs be too great?

NDA CADETS, PLUMMING, AND A CULTURE OF IMPUNITY

Earlier this year, a video of a bunch of military cadets were filmed deliberately holding up traffic and harassing civilians. This act, which is a tradition known as Plumming 101, is usually a military hazing ritual performed by cadets during Christmas or New Year holiday. It is intended to display their military authority, and how much the young officers can display a show of force.

The Nigerian military has been accused of misusing its authority and harassing citizens, a perception it has tried to manage by swiftly punishing acts of impunity and distancing itself from abuse of power. Now that Plumming has been exposed to an unimpressed electorate, will the tradition be phased out of military life?

“Yoruba kings and chiefs who indulge in clubbing, smoking, drinking, and other untoward behaviours are not worthy of honour and any respect,” says the Alaafin of Oyo, Oba Lamidi Adeyemi. He said this during the installation of Fuji maestro, King Wasiu Ayinde Marshal, as the ‘Mayegun of Yorubaland’.

The new Mayegun, who now holds a chieftaincy title with the responsibility to advocate for the unity of the Yoruba tribe, is also known as the ‘king of Fuji’, a style of dance music combining juju, apala, and Yoruba blues. On December 20, 2019, the Fuji legend was spotted at Quilox, a popular club in Lagos, Nigeria, where he was sprayed $100 notes by Grammy Awards nominee, Burna Boy.

According to the Senate, the bill was introduced to criminalize sharing false information on social media, which it explained was necessary to counter malicious intent. By November 2019, more than 85,000 people signed an online petition against it, with #SayNoToSocialMediaBill leading Twitter trends for many days. For critics, the bill intends to limit freedom of speech and government criticism. It was also exposed to be a verbatim copy of the Singaporean legislature, further weakening its legitimacy, it remains contested in the Senate and reviled by the public.

In what many saw as uncharacteristic of the Boko Haram terrorist group, it was reported that five aid workers kidnapped by the sect on December 22, 2019, were released. The release was facilitated by the State Security Service (SSS), but many people seem to believe that a ransom was paid.

The release also suggests a softening of Boko Haram’s often draconian responses to dissent as it expands its operations into Borno. Boko Haram’s actions will be watched closely this year as the Nigerian government seeks to make good on its promise to fully eradicate the terrorist group.