Lagos: The city of dreams is spilling over 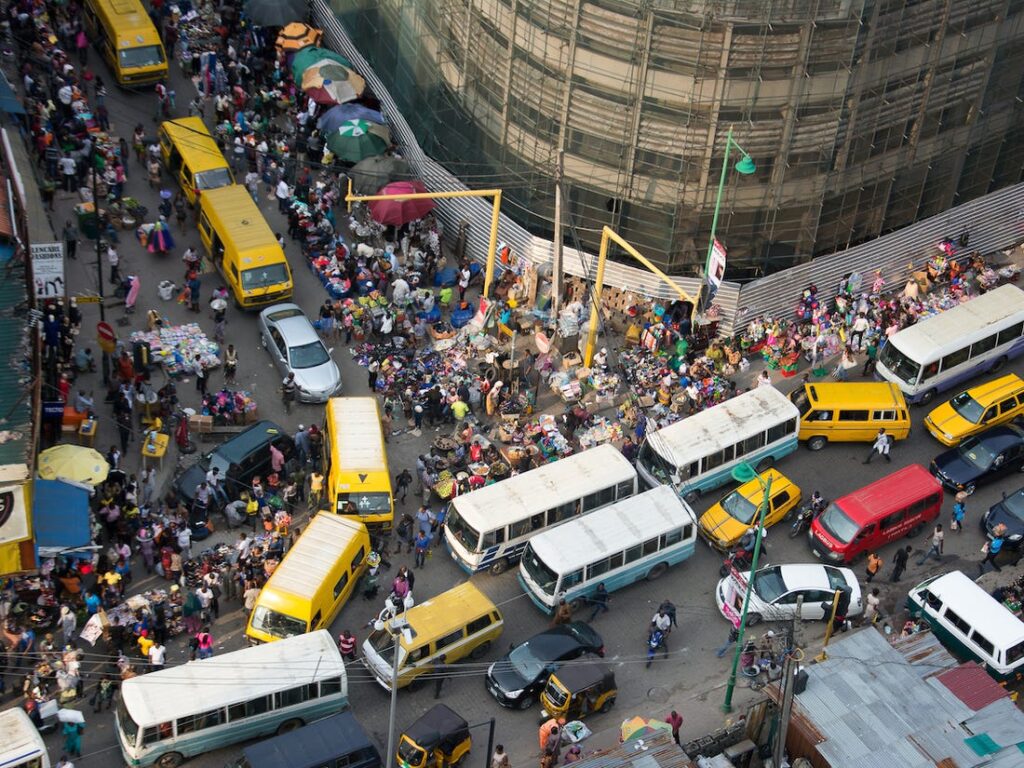 Nigeria is facing a crippling population boom and at the centre of it is its famed mega-city, Lagos state. Nobody knows exactly how many people live in Lagos, but they all agree on one thing – Nigeria’s biggest city is growing at a terrifying rate. Cities grow mainly through rural-urban migration. That is true of Lagos. What was a town of around 300,000 people in 1950 had become a metropolitan area with a population of more than 17 million by 2006 (census data). The UN puts the population of Lagos at 14 million but state authorities think it’s nearer 21 million.

The state government reckons the population is growing by about 500,000 every year as rural Nigerians are drawn by the hope of a better life to one of Africa’s few mega-cities. Every week, tens of thousands of people arrive in Lagos, heading to neighbourhoods where friends and relatives have come before – many end up in the slums. The University of Toronto’s Global Cities Institute projects that by the end of the century, Lagos will grow to 88 million, making it the world’s largest city.

It has also been estimated that by 2050, Nigeria will have twice the population it has today, more than half will live in cities, and about 60% of them will be under 25 and the biggest factor to the rural-urban migration is poverty and unemployment that’s prevalent among the country’s youth population.

In an overcrowded neighbourhood in Agege, Lagos, Jerry Osafele, 34, is a construction worker. Jerry is from a rural village in Delta State, and he’s left his mother and 4-year-old child at home and come here to try to make money. Jerry Osafele is just one of many rural Nigerians drawn to Lagos.

“I came here to help my family live a good life,” he says. “This work is hard, but I am the breadwinner”.

There are few good jobs and housing is in high demand, but at least there are opportunities. The sad story is, these opportunities are most times elusive and even when you get them, the cost of living and commuting in Lagos makes it difficult to save up enough money. Many people here are like Jerry. Some are living in worse conditions.

It’s always the allure of a better life, the drive of ‘making it’ that draws people to the mega-city. Lagos is popularly referred to as a city that never sleeps. Indeed, commercial activities take place in many parts of this city 24 hours every day, with an international airport and a busy seaport. Lagos is the dream city for millions of Nigerians, and its population soars as people from all over the country flock to it in search of greener pastures, sometimes real, sometimes elusive.

With a population density of 4000 to 20000 (people per sq km), Lagos is an accident in motion. 60% of the people living in Lagos dwell in slums and only 45% of the population are skilled workers.

Nigerians know they are by far the most populous country in Africa, and they are proud of it. At the centre of this misplaced sense of pride is Lagos state. ‘Lagosians’ as they like to be called, are proud of the population of their megacity. You will see them carelessly throwing the descriptor into conversations like a buzz word. This is a sign that Nigerians do not understand the terrible ramifications of population explosion. California is the most populated state in America with a population of over 39 million people, but the population per square mile does not make California overpopulated because the resources and the land area can accommodate the population.

This is not the case for Lagos state.

While speaking at the 51st Session of Commission on Population and Development in New York, in 2018, Chairman of National Population Commission, Eze Duruiheoma (SAN) pointed out that Nigeria’s urban population growth has not been accompanied by a “commensurate increase in social amenities and infrastructure.” More generally, economic growth has not kept up with population growth. Hence, the enormous slums outside city centres. In effect, Nigeria has no population policy that would limit births, and Nigerians have traditionally valued large families. Yet the country’s rapid population growth, especially in urban areas, poses difficult economic, social, and public health challenges. A huge, rapidly growing population is not necessarily a source of national strength.

In the urban areas of the Lagos metropolis, the average population density is over 20,000 people per sq km. Current demographic trend analysis reveals that Lagos’ population growth rate of 8% has resulted in its harbouring 36.8% (an estimated 49.8 million) of Nigeria’s 150 million urban population (World Bank, 1996). (unofficial figures of Nigeria’s population in 2020 stands at over 190 million people).

The implication is that whereas Nigeria’s population growth is approximately 4-5% and stands globally at 2%, Lagos’ population is growing, comparably, ten times faster than that of New York and Los Angeles (USA), with grave implications for urban sustainability.

A graphic illustration of this development is the emergence of slum and squatter settlements in Lagos. With the increasing population of the city, the living condition in the areas of Isale Eko degenerated as the ratio of persons per habitable room rose to between 5.8 and 22 (Akpotor 2001, p. 95). The result was the emergence of Ije Slum in Obalende area of the island.

The situation in some other non-urban and unplanned areas such as Ajegunle, Iwaya and Iponri that had been engulfed by the expanding metropolis also worsened. Many more emerged to the extent that the Lagos Metropolitan Master Plan prepared in 1980, identified 42 such areas, (The Guardian October 18, 1999, p. 35; The Punch October 3, 2001, p. 37; Vanguard December 31, 2002, pp.32-34.) all of which according to Rasna Waran, are ‘most obvious manifestations of poverty’ (The Punch July 16, 2004, p.16) and decay. Painting a graphic picture of a slum, Socio-Economic Rights Initiative (SRI), a nongovernmental organization in Lagos notes: The houses are drab, dirty and reeking with unclean and decaying refuse. Water is scarce and must therefore be rationed; excreta disposal is inadequate with litters of human waste being a common sight in a neighbourhood…[there] are also inadequate drainage facilities with wastewater forming mini puddles within the compound where mosquitoes and insect vectors exercise their reproductive potentials. The degree of environmental pollution emanating from such a high level of squalor can be imagined by realizing that epidemics of cholera, typhoid fever and dysentery are frequent occurrences. (Vanguard, September 18, 2006, p. 42).

“As the city population swells by up to eight per cent every year, the slums and their associated problems are growing. The government estimates that Lagos will have expanded to 25 million residents by 2015.” (New Humanitarian, 2006). This projection was made in 2006.

These effects are presently felt most especially in; energy consumption, carbon emissions, air pollution and human congestion. The increase in air pollution has remained a problem in Nigeria, as other sources such as automobiles and diesel-fired electricity generators contribute to the choking air in cities such as Abuja and Lagos, which are plagued by daily smog shrouding the skyline of the central city. Studies carried out by the Federal Environmental Protection Agency (FEPA) show a moderate-to-high concentration of pollutants such as carbon monoxide, sulfur dioxide, nitrogen oxides, organic acids and hydrocarbons in the atmosphere, the majority of which come from automotive engines and industries. The population explosion in Lagos since the 1960s and during the 1970s oil boom put tremendous pressure on city government resources, which could not keep up to manage traffic adequately, same is now being seen in Abuja, the national capital.

Despite having a population estimated at 21 million, Lagos does not have a subway or intracity rail service, leaving residents dependent on automobiles for transportation. Lagos is also struggling with a lot of negative challenges such as endemic poverty, growth of slums (mentioned earlier in this paper) with life-threatening conditions, housing shortages and overcrowding due to increasing population growth, severe environmental degradation, high crime rate and ethnic tension (Vanguard December 5, 2002, p. 35; Ihonvbere June 2002, pp.1-27; Momoh and Soteolu June 2001, pp.1-9). For many in Nigeria’s largest city, traffic congestion has become a symbol of the country’s inability to keep up with its rapidly growing population.

Lagos is crowded, chaotic and crumbling and with future projections by population experts and researchers, the worst may be yet to come. The overall effects of growth in numbers on the living standards, resource use and the environment will continue to change the Nigerian landscape for a very long period of time if nothing is done to checkmate the rapid population growth. But, city officials are surprisingly optimistic about the future.

Private investors with foreign exchange dollars are buying up land and converting them to big office and apartment buildings. Luxurious skyscrapers on the coastline now sit or are where demolished slums and the livelihood of many who are now jobless, used to be. They all say Lagos has nowhere to grow but up. In reality, It’s actually plummeting under the weight of its own infrastructure failures.

People in search of a better life looking to make ends meet will not stop trooping into Lagos, no matter how many stories of the city’s dystopian centrifuge they hear. If the current crop of leaders do not treat this overwhelming population explosion as a matter of national urgency, this city of dreams, and projected smart city of the future, may become a nightmare of unfathomable proportions before its full potential can be actualised.