10 billboards in popular areas in Lagos 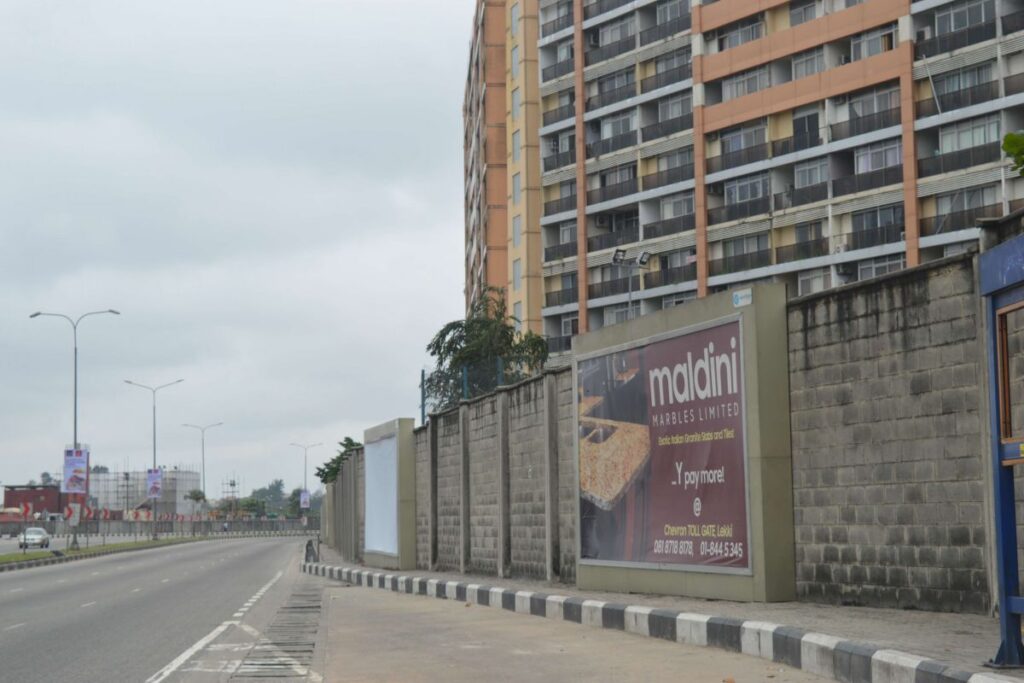 Traditional advertising mediums like billboards not only remain popular, but advertisers are spending even more money on the medium than they were decades ago.

There is a joke that if you get into a bus going to Ikorodu garage from Ketu or somewhere away from the garage, and no one stops at the Agric bus stop, then you must have been kidnapped. The Agric bus stop has a lot of residents, many of whom work outside the town and most likely pass through Ikorodu road. A visit to the bus stop in the morning will convince you that the population there is enormous. The unipole billboard at the Agric bus stop is positioned at an excessive commercialised place and will surely get your message across. This strategic place is fundamental because it serves as a connector for lots of multi-island and mainland routes.

This Wall Drape billboard is located beside the popular 1004 Estate, Victoria Island, Lagos, Nigeria. A highly commercialised area where your message will undoubtedly be seen. It is located in Lagos’ busy district, which houses decision-makers and corporate headquarters of some companies. Its size provides premium visibility and impact for campaigns aimed at increasing brand presence and recall. This billboard could get you up to 5,000,000 views every month.

This Bridge Panel billboard is located at Gani Fawehinmi Park, Ojota – a busy commercialised area that has a lot of vehicular and pedestrian movement. Your message on this billboard will meet working-class individuals, young people and travellers who use this route daily. Racking up to 7,000,000 views per day (on average), this billboard is poised to attract the attention of people who travel through this commute as it is a region known for heavy commuter activities.

The Allen roundabout is surely a busy area connecting many places in the vicinity including leading to the Lagos government secretariat, the Ikeja City Mall, Obafemi Awolowo Way, and so on. This billboard is positioned to get as much as 6,000,000 per month.

The Berger bus stop is arguably the most popular bus stop in Lagos – meeting travellers going in and out of the state and those who use the bus stop to connect to many other towns in the state. This portrait billboard is at a border town between Lagos and Ogun and meets an average of 10,000,000 eyes per month.

This Unipole billboard is located at Federal Civil Service Club, off Ring RD, Ikoyi – a commercialised area with high vehicular movement. This billboard could get you up to 6,000,000 views per month. Set in one of the busiest areas on the island, this billboard is strategically located to seize the interest of commuters.

This Gantry billboard at Oworonsoki, by Global Impact Church, Ifako, meets considerably high vehicular and pedestrian traffic every day – those going towards Berger and towards the Third Mainland Bridge or Oshodi on the other side. Its size guarantees its visibility and it meets an estimated 6,000,000 eyes per month.

This portrait billboard is located along Ahmadu Bello Way, Victoria Island, opposite Naval Dockyard by Bar Beach. Its unique location makes it attract both vehicular and pedestrian audiences on a daily basis as the advert space is within close proximity to social places. It offers enormous brand awareness and conveys advert messages effectively.

This digital gantry billboard is located at Fadeyi along the high trafficked Ikorodu Road, Lagos. The billboard faces the entry and exit points to National Stadium and Lagos Marina Central Business District. This route experiences very high vehicular traffic on weekdays to and from Maryland, Yaba, Ojuelegba, Eko Bridge and Marina Business District. Its immense size provides excellent visibility and impacts for campaigns to maximise brand presence and status.

Oshodi is the most popular place in Lagos, no wonder the former governor situated the interchange there. It is popular because it sits in the middle of several other towns and has commercial vehicles going to every part of the state, and outside the state. The billboard is located along Mushin to Oshodi road by the Ikeja cantonment and it is visible to both vehicular and pedestrian traffic.