Your next industry exposé may likely come from a drama channel, not the NYT 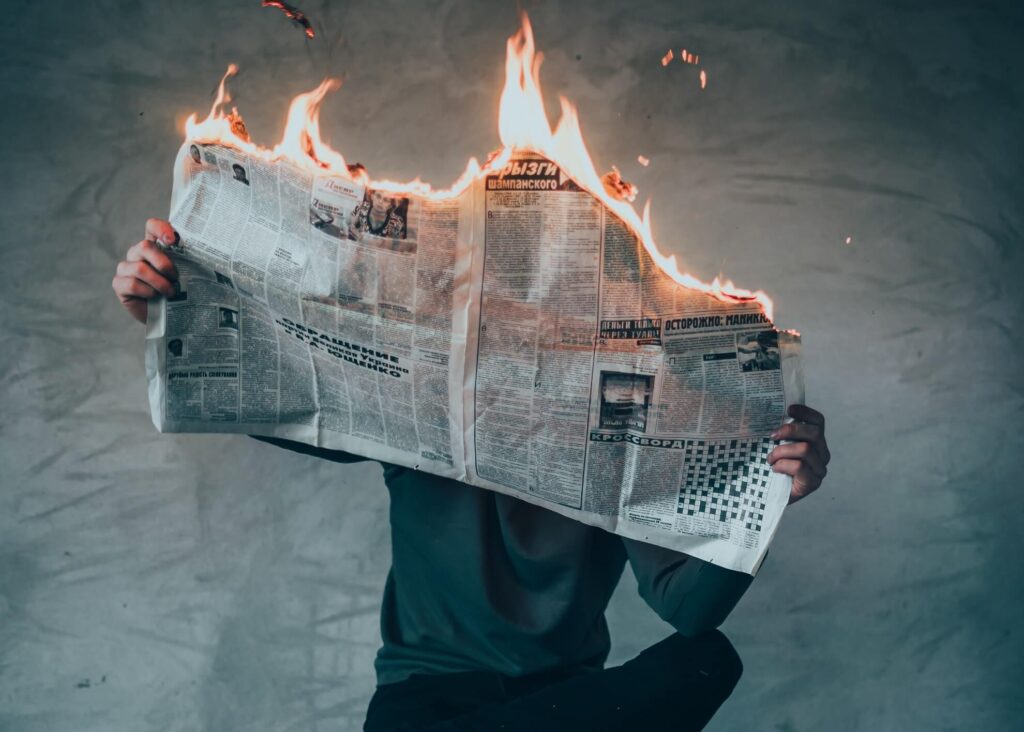 Remember a time when CEOs of multi-million dollar businesses were mythical figures, couched in their private lofts, separated from the millions of customers who used their products and provided the revenue and profits that kept their businesses afloat? Well, you might be a shrinking minority because everyone born after 2000 has grown up in a world where CEOs, founders, and upper management has not only been forced to abandon anonymity, but actively build personal brands where they interact with employees, fans, and customers.

The internet by its very nature rewards its users for their ability to source and disseminate information. And information is at its most valuable when it is about people who already have influence or power. News about Jeff Bezos’ divorce broke the internet, as  did his acknowledgement and refusal to back down.  A single tweet from Elon Musk  was enough to influence the US stock market and force the US government to indict him on corruption charges.

Just because powerful people have become accessible to us, doesn’t mean they don’t have the tools to protect themselves and information about themselves. Our proximity to them doesn’t remove the swift consequences that come with publicly sharing information about them that they want to keep private. Famous people also feel trapped by their public personas and buck against their popularity by creating  pockets of anonymity  where they can be their ‘truest’ selves.

Even in more equal online relationships, the internet’s eternal archive makes it harder for us to share sensitive information about ourselves and others without becoming permanently associated with said information and branded as a person that cannot be trusted with information, even when the choice to share is the right one. This has led to the internet culture of  ‘burner accounts’, anonymous accounts that are created for the sole purpose of truth-telling, and the sharing of anonymous tips with the many news and gossip accounts that have sprung up to monetize and weaponize this sensitive information.

Nigerian media mogul Angelica Nwandu is one of many internet savants who have built multi-million dollar businesses from scouring the internet for information and ‘breaking’ this information to an audience rabid for news. Her business  The Shade Room is an Instagram first platform whose reach and engagement are eclipsed only by two other accounts out of the millions that exist on the platform. For enthusiasts in the beauty and fashion industries; three accounts reign supreme over this subgenre,  @Diet_Prada  and  @TheFashionLaw  cover news from the fashion industry revolving around theft of designs and intellectual property and fashion CEO’s and founders behaving badly and  @EsteeLaundry  replicates the model for the beauty industry.  On Youtube, accounts that participate in this form of information curation and dissemination are called ‘Drama channels’ and have cost many a company losses that rise to the millions.

This is the perilous world in which CEOs, who were once revered, must do battle, growing personal brands that can be just as influential as the companies they run, and constantly teeter at the edge of ruin.

How do ‘drama channels’ and ‘gossip accounts’ get so big?

They get three things right about storytelling. They match the urgency of the social media age, they offer exclusive information and they reach the audience where it consumes that information. Nigerian gossip blogs like  Instablog9ja  (with 2.8 million followers) and  Gistlover  (with 350k followers) have both managed to amass millions of readers and followers by adopting anonymity to free them of any relationship based obligations, offer exclusive news and gossip and find a delivery style that separates them from the competition. Together, both blogs have ousted Linda Ikeji, who used to dominate the gossip scene only 5 years before.

This is also why Angelica Nwandu refuses to move the bulk of her content from Instagram to her equally successful website. With  20 million active followers, and 1.5 billion weekly impressions, Nwandu is able to generate engagement and conversion values that a website could never manage. The functionality of Instagram (you simply scroll down your feed + its explore function which uses an AI to push performing stories to even more people) is infinitely more appealing than the many actions that must be taken to access an article on a website. The flexibility of Instagram (the option to post video or photos, and post text as a photo) allows her to share information as it is received, then update that information as the story develops. The ease of archiving a story also allows her to retract inaccurate information without the fuss of a website.

‘Drama channels’ harness the algorithms of Youtube, are meticulous about presenting the information they have as an immersive multimedia show, with reveals and pullouts, bells and whistles.  Each scoop is presented with such flair, many die-hard fans of ‘drama channels’ enjoy the presentation almost as much as they love the drama.

Most importantly, YouTube, Twitter and Instagram are free for the user and generate revenue for the creator, an incentive for both parties to create and consume.

3 ways companies can restructure their brand storytelling to avoid the pitfalls of modern public identity.

1. Understand the rules of the game

Many public personalities fail at social media because they don’t appreciate the stakes involved in engaging on social media, and they don’t seek to understand the rules that govern online interactions. Soviet psychologist Lev Yvgotsky encapsulates this idea via his description of a fundamental but often overlooked tenet of interpersonal relationships: “Personality develops through encounters with the physical world and through relationships with other human beings which are mediated by language.”

When interactions happen entirely on a virtual platform, the importance of language as a mediation tool becomes amplified. Every word choice becomes subject to multiple interpretations as there are no other cues by which we may be understood. To thrive, we must understand that the identity we assume on the internet is built by each interaction we have, and each interaction is treated like a promise that must be fulfilled and a claim that must be verified. It is vital that we do not say anything we do not mean, that we avoid all interactions that do not offer any immediate or long term benefits. To quote cultural commentator and essayist Jia Tolentino, “Identity is a series of claims and promises. On the internet, a highly functional person is one who can promise everything to an indefinitely increasing audience at all times.”

The tools that allow users to curate their audiences (private accounts, blocking dissenting voices, muting hashtags) are all actions that are considered insidious from people with influence and outrightly illegal for some people with power (the US president is legally forbidden from blocking users or making his account private). Influential figures must somehow either, build a conservative persona guided by strict rules that must be adhered to at all times, or fully embrace the chaos of an unmoderated online persona, much like Elon Musk has done with his twitter account.

The Humans of New York social project is a prime example of how human to human storytelling can elevate any project. Run by Brandon Stanton, the account’s modus operandi is to visit a city, collecting curated stories from its residents, each one distinguished by its uniqueness of events, the compelling nature of its subject and the distinct branding of Stanton’s storytelling. HONY has become one of the biggest anthropological projects in the world, covering stories across Africa and the rest of the world, contextualizing political and cultural events by filtering them through the experiences of everyday people. With 10.7 million involved followers, it is hard to argue with this brand of storytelling.

3. Show your company is about people, not just structures

It is an idea that many corporate entities, including RED, have adopted in the storytelling narratives it shares of its employees, clients and process on social media. The premise is simple, its achievements are intricately tied to the quality of hires made and the number of team members retained. By treating each individual in the company as a person with a vast internal life worthy of careful exploration and curation, the idea is emphasized that the company values the employee beyond the quality of their work or their value to the company. They are celebrated for their individuality and how that individuality contributes to company success.

Humans of RED  has been a resounding success and a passive recruitment tool and portfolio for RED when it seeks new employees. Its growth rate, the goodwill its co-founders enjoy in online and offline spaces and its happy and engaged staff suggest this model of human first storytelling and carefully curated execution is a model that others should actively consider in the era of misinformation.

4. Hire a team to help craft and maintain your online persona

Roqeebah Olanioye, Team Lead at Statecraft Inc. often has to build online personas for government officials or public parastatals. Her time in this volatile field has granted her and RED insights on how to build a brand that can appeal to a mass audience and unite them under a singular cause; i.e. a presidential campaign. In the course of her work, she has had to guide frontline presidential candidates who opted to leverage the power of Nigeria’s growing political niches on social media to advance their campaign on how best to establish and sustain an accessible but authoritative online persona.

“For us, it’s important that the candidates’ people encountered aren’t just talking heads…  Each video, interview, and public appearance must be structured to feed into the persona we wanted online audiences to see and connect with, and we wanted to reiterate that the battle for a seat in the presidency would happen at the polls, not on our timelines.”

The widespread impact achieved by political candidates and the viability of their online brand is a testament to how vital a carefully orchestrated storytelling campaign deployed on behalf of a public personality can inure them to malicious scrutiny, help them bypass the many road-blocks that plague other public personalities, and provide a sense of scale for the client, ensuring their correspondence is always calibrated to resonate with mass audiences, rather than offending them.