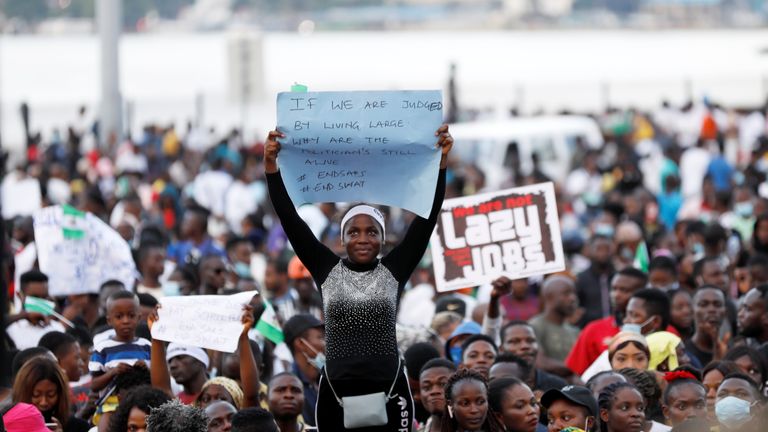 The brewing agitation that grew to become the rallying point for the fight against police brutality in Nigeria, started on 4 October, 2020, when a video recorded near Wetland Hotel in Ughelli, Delta, went viral on Twitter. Recorded by Nicholas Makolomi – who incidentally has just released from police detention this week – the video showed men believed to be members of the Special Anti-Robbery Squad (SARS) speeding off in a vehicle after allegedly shooting the owner.

Barely five days later, #EndSARS was the top trending hashtag globally with over 2 million tweets recorded. By mid-November, the campaign had recorded 302 billion impressions and over 3 million posts – putting the subject of police brutality once again on the front burner across the world but this time from the perspective of the Nigerian youth.

While the global community continues to deliberate on the adequate response to the attack at the infamous Lekki Toll Gate, the question remains:

is the #EndSARS movement really over and done with?

Will such generation-defining movement which grabbed global attention and attracted comments from notable personalities like the former US Secretary of State, Hillary Clinton; music artiste, Kanye West; US President-elect, Joe Biden and other global leaders, suddenly go silent? Do young Nigerians believe that the protest didn’t achieved much?

Extended conversations with selected members of our consumer panel which is spread across the country, including our body of experts, highlight their thoughts on not only the nature of the protest – which has been described as a “monumental movement in Nigeria’s history” – but also its future.

The #EndSARS movement has only just begun.

While a little short of 50% of the respondents indicated their disappointment at the government’s reaction to the largely peaceful protests, the general sentiment revolves around how the agitation “has become the hope for change”.

Considering the immediate aftermath of the protest: the arrests and harassments, passport seizures, bank account freezes, inconsistencies on the part of the government on how to positively address the dissatisfaction among its youth — the protests were described as “an amazing show of unity against a joint oppressor”.

“The protest could have yielded good from the time the federal government gave the youths attention,” said a panel member in Ilorin, Kwara. “But we are where we are today without good result from the protests. Can the protest be re-ignited? Yes. Will many young people join in? Yes. Should there be a strategy this time? Absolutely!”

But how far did the protest go? Can it be said to be national in outlook? About 61% of our panel agreed that it was – a group largely dominated by panelists in Lagos, Ibadan, and Abuja. Over 39% however believe that it was not a nationwide movement, while 9.2% were not sure.

Beyond the geographical coverage of the protest, the panelists dug deeper into the underlying factors that may end up fueling what they call #EndSARS 2.0.

With the worsening economic condition, institutionalised corruption, and state profligacy, there is a growing discontent among young Nigerians who suffer the effects of this widespread maladministration. With several weeks of nationwide lockdowns and closure of educational institutions due to strikes held by lecturers, this represents some sort of a perfect storm for another wave of protests.

#EndSARS 2.0 won’t just be a social-revolution movement. It will be purely political and targeted at replacing the old order

#EndSARS 2.0 won’t just be a social-revolution movement. It will be purely political and targeted at replacing the old order,” said one of our culture insiders. “It is going to be so surprising because the establishment would underestimate and intimidate, but the youth will press on and eventually have their way”.

Tracing down the country’s history, another panelist compared the movement to the Aba Women’s Riots that started in November 1929, and the National Democratic Coalition (NADECO), a group that called for the military government to relinquish power to a civilian government headed by the presumed winner of the 1993 general elections, MKO Abiola. “The only difference is the documentation,” a panelist confirmed.

The general sentiment however remains that even if there is no consensus on the geographical impact of the protests, the #EndSARS movement is the “beginning of greater things to come”.

How it chooses to reveal itself in the future will depend mainly on young Nigerians’ growing restlessness over the government’s inability to deliver on its promise to change the socio-economic status quo.